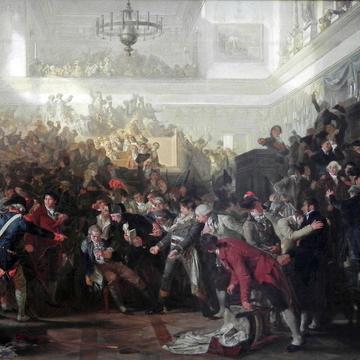 The TORCH Crisis, Extremes, and Apocalypse network are hosting a talk on 'Robespierre and the Politicians’ Terror' with Marisa Linton (Kingston University).

Over 220 years since his death, Maximilien Robespierre continues to generate controversy, above all for his role in the French Revolutionary Terror. Historians have repeatedly turned to the problem of Robespierre’s individual personality and motivation as a means to explain the Terror.

This talk contributes to the debate by situating Robespierre’s ideas, motives and actions within the wider context of the ‘politicians’ terror’, which encompassed deputies in the National Convention. The ‘politicians’ terror’ is a subject I identified and explored in my latest book, Choosing Terror: Virtue, Friendship and Authenticity in the French Revolution. This was the terror that revolutionary leaders meted out to one another. The revolutionary leaders were themselves ‘subject to terror’, both as laws to which they themselves were subject, and as the emotion of terror.  By examining Robespierre’s political choices in terms of the collective revolutionary experience we can throw light on the crisis of the French Revolution.

Many historians have sought answers in Robespierre’s individual personality and psychological make-up. In this paper I approach the subject from a different angle, by situating Robespierre’s choices within the wider context of the deputies of the National Convention.