Sampling the City: Shiva Feshareki Live at the Sheldonian

Part of the Humanities Cultural Programme, one of the founding stones for the  future Stephen A. Schwarzman Centre for the Humanities. 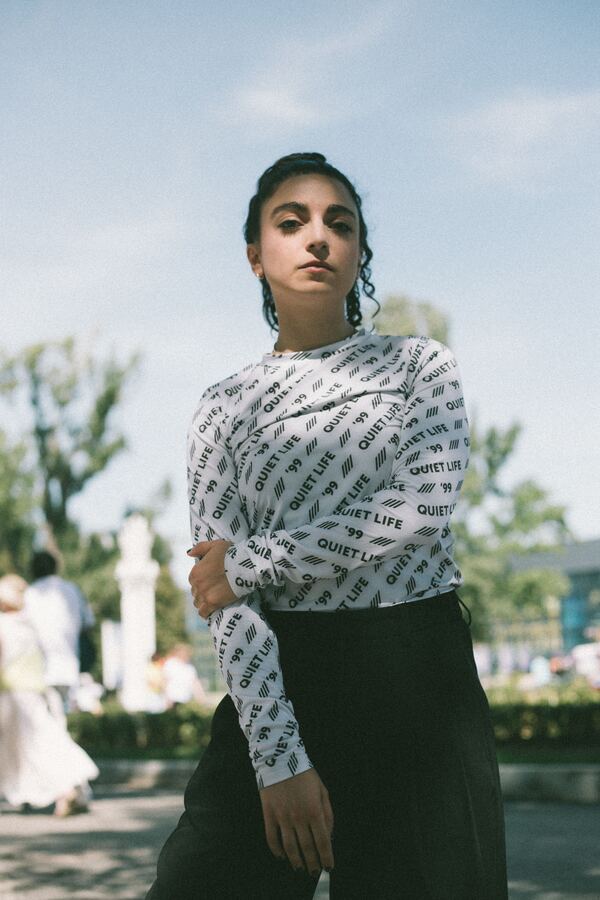 Sampling the City: Shiva Feshareki Live at the Sheldonian

Sampling the City is an interdisciplinary project between HCP Visiting Fellow Shiva Feshareki and EMPRes that incorporates sound, electronic music composition, new technology, space, hermeneutics and architecture.  The project will culminate in a unique spatial composition created live in-the-moment at The Sheldonian.  A cutting-edge 16 speaker ambisonic sound-system will generate a new form of 3D spatial audio controlled by Shiva as she composes live, listening and responding to the acoustics, energy and architecture of The Sheldonian, aligning its history with the present composition.

Using her turntables, samples collected from in and around Oxford will be incorporated with music and archive recordings from the EMPRES library.  Old college choirs LPs and soundwalks from around the city will be morphed, expanded and contracted into intangible objects of sound that move, swirl and glide in the space.  Different voices will be heard and manipulated live in improvisation, speeding them up, slowing them down, forwards and backwards to infinite effect, creating music and new perspectives out of the diverse sounds and narratives of Oxford.  This approach is archetypal of Shiva's ambisonic live turntablism in which she fearlessly warps time and space through the boundless possibility of her turntables, interconnecting society, geography, and history into musical compositions that broaden perspectives and free minds of restrictive social and sonic constructs.

Shiva Feshareki is a British-Iranian composer, artist and turntablist, described as “the most cutting-edge expression of turntablism” and as “one of the most astonishing acts of musical alchemy of the last decade” (BBC Radio 3). Over the last decade, she has been a pioneer at the leading edge of both contemporary classical and electronic music scenes. As an innovator, experimenter and a self-described sonic architect, Shiva is fascinated by the materiality of sound. Her intrepid exploration of a 360-degree sound world encompasses compositions for orchestral, solo, choral, chamber, electronic and interdisciplinary installation works. She also composes for ‘note-reading’ ensembles (Ensemble Modern, Manchester Camerata etc), where she re-theorises relationships between performer and audience, dissolving physical, historical, and sonic boundaries.

In her live electronic compositions, Shiva fearlessly warps time and space through the boundless possibility of her turntables. She masterfully contorts samples of her own composition along with peculiarities from her own sample collection. She employs an array of technology from vintage analogue tape echo, vinyl turntables, CDJs, to state-of-the-art ambisonic technology to create experiences that reveal the fluid and infinite interplay between sound and the physics of space.

She holds a Doctorate of Music in composition from the Royal College of Music (2017), and is a winner of the BBC Young Composer’s Award (2004), The Royal Philharmonic Society Composition Prize (2009) and the Ivor Novello Award for Innovation (2017). Shiva is currently a Visiting Fellow at Oxford University with the Electronic Music Practice Research group (EMPRes) funded by The Oxford Research Centre in the Humanities (TORCH), researching and presenting state-of-the-art spatial and ambisonic electronic composition. In May 2022, Shiva released her critically acclaimed album Turning World, earning the title of The Guardian’s Contemporary Album of the Month. The Observer praised her for her “restless invention” and described the record as “beautiful and bewitching”. BBC Music Magazine described it as “a bold and fascinating Josquin-inspired sonic landscape”, labelling Shiva as “the innovator who doesn't try to be original”.

The University of Oxford’s Electronic Music Practice RESearch group (EMPRes) aims to promote and advance research in Electronic Music Practice at a national and international level. It will do so by working with researchers and academics from a wide range of disciplines interested in electronic music, as well as with musicians, composers, producers and other members of the music industry. It aims to function primarily as a framework to provide support for practice-based activities.

The group's approach to electronic music practice is broad and inclusive, incorporating areas such as electroacoustic music, sonic art, record production and popular music, performance with electronics, field recording, music for film and numerous other genres and styles. The definition of electronic music is a complex, much-discussed topic, and EMPRes defines the field broadly.

EMPRes exists to foster and support activity in this field within the University, and to encourage collaborations between partners from different parts of the institution, local external partners, other institutions, and the music industry.

The ambisonics for this event are powered by AUDITIF (Serafino di Rosario and Mario Buoninfante).

Click below to watch a preview of Shiva Feshareki’s immersive performance:

Sampling the City: Shiva Feshareki Live at the Sheldonian (Trailer)