Sigune Hamann: Did You Spot the Gorilla? 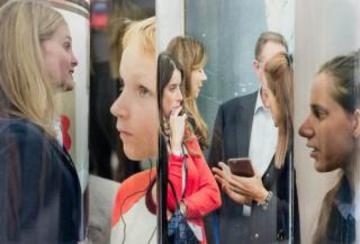 Hamann’s work tests our attention and perception.  Much of Did you spot the Gorilla? was developed in response to the work of Department of Experimental Psychology neuroscientist Kia Nobre with whom she shares a curiosity about how our memories and expectations shape what we see.

The exhibition puts space-related perception in counterpoint to Hamann’s immersive panoramic film-strips and, on another scale, artist’s books and a multiple. She explores how experimental treatment, physical handling and viewing of images playfully test and shift perception of ourselves relating to others.  A series of large freestanding paper cylinders, Seeing Being Seen,  showing figures of subjects featured in the other pieces, has been placed in a gallery as if they are a gathering of people – the viewer becomes simultaneously part of the group while knowing that they are different from the images presented.  In Freshers, a series of 100 photographs of first meetings, we see the visualisation of social interaction amongst students in London, Tokyo and Oxford, while Fair’s Fair explores people looking, meeting and dealing at Frieze Art Fair.

Norman Bryson’s 1988 essay, The gaze in the expanded field has been a key text for the artist:

‘The viewer who looks out at the object sees only one angle of the global field where the object resides, one single tangent of the 360 degrees of the circle, and of the 360 degrees in all directions of the radiating sphere of light spreading out from the object into the global envelopment.’… ‘Everything converges on this intrusive centre [of an image] where the watcher self is NOT: the intruder becomes a kind of drain which sucks in all of the former plenitude, a black hole pulling the scene away from the watcher self into an engulfing void.’

Hamann’s work skilfully draws the audience into the work and implicates them performatively in the pieces while constantly reminding them that the images represent a different context and time. The audience oscillates between being implicated in the scenes and being reminded that they are in a separate time and place from the image.

The exhibition runs from 28th January to 10th February 2019 at The Barn Gallery, St Giles, Oxford OX1 3JP and will be open between noon and 6pm daily.