Social Media in the Eighteenth Century 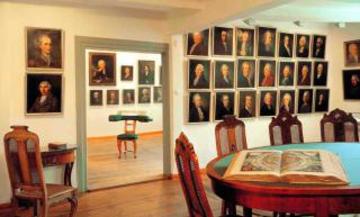 Tobias Heinrich (University of Oxford), ‘Social Media in the Eighteenth Century: Johann Wilhelm Ludwig Gleim (1719-1803) and the Temple of Friendship’

This talk presents an ongoing research project on Johann Wilhelm Ludwig Gleim, a key figure in German intellectual life in the Age of Enlightenment. While widely known for his poetry in anacreontic verse and the literary praise of King Frederick II during the Seven Years' War, Gleim primarily gained his reputation through his role as patron and networking figure.

'Social Media in the Eighteenth Century' explores the media apparatus Gleim employs in his epistolary practices. Combining letter writing, portraiture and mundane objects, he develops innovative forms of self-expression that in many ways resemble the digital social networks of the twenty-first century. Within Gleim's correspondence, the subject is constituted through collective authorship and the interplay of the textual and the pictorial. In his letters, which draw on extended notions of friendship to shape social relations, identities are negotiated and the boundaries of public and private become porous. Following approaches in new German media theory (Kittler, Koschorke) and concepts of the dialogical self (Zima), this project links historical configurations of epistolary correspondence to current communication practices in the digital sphere. It aims to increase our understanding of past means of communication while at the same time contributing to the analysis of more recent changes in the use of media and the formation of social networks.