Tales of Love and History: James Ivory in Conversation 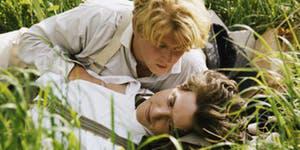 TORCH is thrilled to host Oscar-winning director, James Ivory as a Visiting Professor in 2018.

Oscar-winning American film-maker James Ivory will talk about his experiences with the legendary Merchant Ivory productions, in partnership with producer Ismail Merchant and screenwriter Ruth Prawer Jhabvala. Merchant Ivory is celebrated for the rich cultural diversity of its films, which are often set in India, France, England and America, and are distinguished by their visual poetry, fiercely egalitarian attitudes, and quiet wit. The conversation will touch on questions about the use of the historical past in Merchant Ivory films, about his own experiences of literary adaptation as both director and writer, and about the representation of love and cultural diversity. As well as films such as A Room with a View (1985) and The Bostonians (1984), the conversation will consider the recently re-released ground-breaking same-sex romance Maurice (1987), whose screen play features in the Ashmolean’s exhibition No Offence.

James Ivory will be joined by three outstanding academics, whose research engages with the themes of diversity, equality, inclusivity, love, desire and storytelling that are central to his life’s work. Richard Parkinson is Professor of Egyptology at the University and the author of A Little Gay History: Desire and Diversity Across the World (2013). Katherine Harloe is Associate Professor of Classics at the University of Reading who is currently working on an edition of the love-letter of Johann Joachim Winkelmann. Jennifer Ingleheart is Professor of Classics at the University of Durham, whose most recent book – Masculine Plural: Queer Classics, Sex, and Education – has just been published by Oxford University Press.

This event is part of a series of public events and projects:

Temporary exhibition at the Ashmolean Museum

LGBTQ trails around the exhibition and Oxford city: http://oxfordstories.ox.ac.uk/torch

To book tickets for this event, please click here. This event will be filmed and will be available online shortly afterwards.

Born in Berkeley, California, James Ivory is a multiple Academy Award®-nominated filmmaker—a prolific director, writer, and producer. He started his career as a documentary filmmaker before beginning his nearly six-decade journey in narrative filmmaking with The Householder (1963), a film that also began his decades-long partnerships with producer Ismail Merchant and screenwriter Ruth Prawer Jhabvala.
Among his films are Shakespeare Wallah (1965); Quartet (1981); Mr. & Mrs. Bridge (1990); Jefferson in Paris (1995); The Golden Bowl (2000); The White Countess (2005); The City of Your Final Destination (2009); Heat and Dust (1983); Surviving Picasso (1996); Maurice (1987), winner of the Silver Lion at the Venice Film Festival; and three films for which Ivory received Best Director Oscar® nominations, A Room with a View (1985), Howards End (1992), and The Remains of the Day (1993). Most recently, he wrote the screenplay for Luca Guadagnino’s adaptation of André Aciman’s novel Call Me by Your Name for which he was awarded the 2018 Oscar® for Best Adapted Screenplay and for which he won the BAFTA and the Writers Guild Award for Best Adapted Screenplay.

Richard Bruce Parkinson is a British academic. He is currently Professor of Egyptology at the University of Oxford and a fellow of The Queen's College, Oxford. He was previously a curator in the Department of Ancient Egypt and Sudan, British Museum.
Parkinson's main area of research in the interpretation and performance of Ancient Egyptian poetry of the classic period. As well as academic monographs and articles, he has written popular books on Egyptology. Drawing on his work on the 'subaltern' aspects of ancient literature, he has published on LGBTQ+ history across world cultures, including A Little Gay HIstory (2013), dedicated to his husband. Most recently, he has acted as consultant of The British Museum's touring exhibition at the Ashmolean 'No Offence' which includes a copy of the shooting script of Maurice.

Jennifer Ingleheart is Professor of Latin at the University of Durham, and is now head of the Department of Classics and Ancient History. Ingleheart is known for her work on Ovid, Classical reception, and the influence of Rome on the modern understanding of homosexuality.
Ingleheart has spoken frequently about her work on how modern cultures have responded to the phenomenon of Roman homosexuality, and the role which ancient Rome has played in modern ideas about sexuality. She ran a major British Academy funded conference in 2012, Romosexuality, on the subject which has shed considerable light on the differences between Roman and Greek conceptions of homosexuality, and differences from modern conceptions. Previously most work on classical homosexuality focused on Greek homosexuality and its modern reception, but Ingleheart's work has facilitated new research and interest in the Roman experience.

Katherine Harloe is Associate Professor of Classics and Intellectual History in the Department of Classics at the University of Reading. Her principal research interest is reception of classical antiquity in Europe from 1750 to the present, with particular focus on the history of classical scholarship in relation broader political, cultural and intellectual currents. She is known for her work on the eighteenth-century German classicist and art historian Johann Joachim Winckelmann (1717-1768), about whom she published a monograph in 2013.  She is currently funded by the British Academy (Mid-Career Fellowship Scheme) to write a book about Winckelmann’s homoerotic love letters and their reception across the long nineteenth century, including in the early homosexual emancipation movement. She has supervised several students working on LGBT history projects, including a digital exhibition about Winckelmann and Greek Love (available at www.curiosi.org) and a project to recover hidden queer histories of ordinary (non-celebrity) men from  the archives of the Berkshire County Record Office.