The Right to Gender Recognition of Transgender Persons: Law and Practice in India and the Nordic Countries 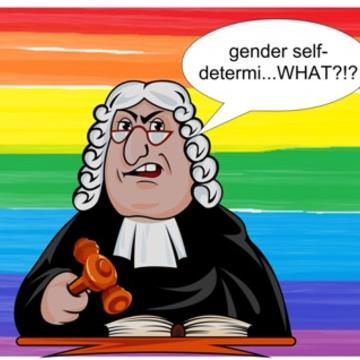 With the South Asia Law Discussion Group (SALDG), the Queer Studies Network is very pleased to be hosting a comparative discussion on the right to gender recognition, featuring Dr Daniela Alaattinoğlu and Surabhi Shukla.

The right to gender recognition, fundamental to many transgender people, is recognised and constitutionally entrenched in some States and not in others. If legally recognised, this right is rarely based entirely on self-identification. Oftentimes, States put up oppressive pre-conditions such as requirements to act gender-conformingly, to undergo hormone treatment, medical or psychological examinations, or surgery, including castration or sterilisation. This comparative talk contrasts the legislation, case law, and practices of legal gender recognition within the Nordic countries (Sweden, Norway, Denmark, Finland and Iceland) and in India as frontiers for trans peoples’ global struggle.

While the Nordics are hailed as world leaders in human rights matters, compulsory sterilisation and castration for legal gender recognition has not become questioned until very recently. The Indian jurisprudence on the right to gender recognition is technically very advanced and may contribute to the state of affairs in the Nordic countries in this matter. Moreover, recent legal changes in the Nordic countries may provide insights for how the great gender recognition rights granted by the Indian Supreme Court may be implemented in practice. In this talk, we will see what these two regions of the world can learn from one another.

Dr Alaattinoğlu successfully defended her PhD in law at the European University Institute in 2019. Her socio-legal PhD thesis comparatively investigates the establishment, abolition and remedy of involuntary sterilisation and castration in three Nordic countries: Sweden, Norway and Finland. She currently works as a senior researcher at the Faculty of Law at the University of Turku on a project on attrition of sexual violence in the criminal law process. More information can be found here.

Surabhi Shukla is an Indian lawyer the core of whose work relates to a feminist and queer critique of law and society. Currently, she is in the final year of a PhD in Law at the University of Oxford. Her PhD examines the role that stereotypical ideas of religion, culture, gender, and sexuality play in the outcome of highly controversial personal life decisions such as those relating to same sex relations or transgender rights, abortion, surrogacy, euthanasia etc.  More information can be found here.

The event will be followed by a drinks reception. All are most welcome. The venue is accessible. Please direct any queries to surabhi.shukla@law.ox.ac.uk and daniela.alaattinoglu@utu.fi