The Second Oxford Sanskrit Play: How Urvashi Was Won 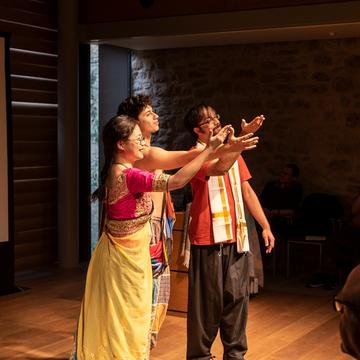 Preceded by an introductory talk on the linguistic and literary contexts of the play given by a Faculty member, we will stage 'How Urvashi Was Won', a well-known Sanskrit play, in Sanskrit, with English subtitles.

How Urvashi Was Won relates the story of King Pururavas and his love for an immortal, the dancer Urvashi, who normally lives in the heaven of the gods but who has come down to earth in order to realize her passion for the all-too-mortal king.

The tragic love of this asymmetrical couple was described already in the ancient 'Rig Veda' and later often expanded. The fifth-century Kalidasa, universally acknowledged as the supreme poet, has reworked the narrative and turned the well-known story into a masterpiece of lyricism, subtle characterization, and the working through of a bold theme.

The Second Oxford Sanskrit Play is generously funded by The Oxford Research Centre in the Humanities, in collaboration with The Queen's College and the Faculty of Oriental Studies. Carrying forward the experience from the First Oxford Sanskrit Play The Middle One in 2020, we will stage another Sanskrit play in Sanskrit, with subtitles, based on the How Urvashi Was Won. Before the hour-long performance, we will offer a brief coffee reception and a short talk on the linguistic and literary context of the play.

Free admission to all but registration encouraged. We particularly welcome visits from local schools or Sanskrit-teaching sixth forms. Please do get in touch with TORCH or yizhou.liu@orinst.ox.ac.uk if you intend to travel in a group so that we can arrange more targeted outreaching events.

If you attended this performance and talk, please do take a few moments to share your feedback via the following link: https://forms.gle/Biwxvg7WTMLKqjjV7