The Tongue, That Untamed Flesh: Polish Poetry, Freedom, and Silence in Translation 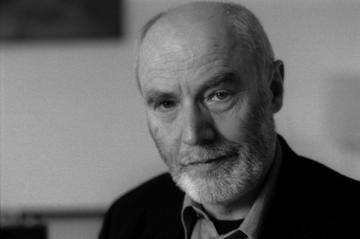 Ryszard Krynicki, one of Poland’s most important contemporary poets and publishers, reads from his work and talks with American poet and translator Alissa Valles about the struggle with censorship and propaganda and its complex effects on language both in Communist Poland and in society today more broadly. Valles’s English edition of Krynicki's collection Our Life Grows was published by the New York Review Books in 2017. This discussion and bilingual poetry reading will introduce Anglophone audiences to the scope and acute ethical and aesthetic sensibility of a major figure in European literature. A Q&A and wine reception will follow.

Ryszard Krynicki was born in a labor camp in Sankt Valentin (Austria) in 1943. Since the 1960s, when he became known as one of the poets of the 'New Wave', Krynicki has been associated with the democratic opposition in Poland. As a result, he was subjected to censorship and then banned completely from official publication between 1976 and 1980, although he continued to publish with unofficial presses and, in the case of Our Life Grows (1978), with the Paris emigré press Kultura. After working for years as an editor in underground publishing and running a private art gallery with his wife Krystyna in their Poznań apartment, he founded the influential publishing house a5 in 1988; from the start, the press focused on contemporary Polish poetry, including the works of Wisława Szymborska, Adam Zagajewski and many younger poets. He is also renowned as a translator of German poets, including Nelly Sachs, Bertolt Brecht, and Paul Celan. Widely translated, he is the recipient of many prestigious literary awards, and was most recently awarded the Zbigniew Herbert International Poetry Prize in 2015.

Alissa Valles is the author of the poetry books Orphan Fire and Anastylosis, a book-length poem printed on thermal paper for an exhibition at the Whitechapel Art Gallery; she studied Slavic Languages and History at UCL/SSEES, worked for the BBC and the Jewish Historical Institute in Warsaw, and has translated the work of Miron Białoszewski, Anna Bikont, Zuzanna Ginczanka, Zbigniew Herbert, Janusz Korczak, and Ryszard Krynicki. She is the recipient of fellowships from the Poetry Foundation and the National Endowment for the Arts and a member of the Editorial Board of the Akron Series for Contemporary Poetics. She is a visiting researcher at the Oxford Centre for Life-Writing at Wolfson College in Spring 2018.

The event is supported by the Polish Cultural Institute.