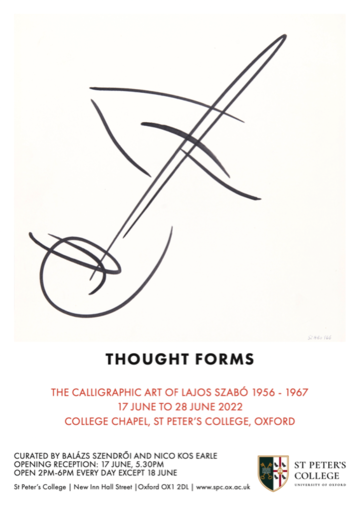 Lajos Szabó (1902-1967) was a Hungarian left-wing thinker and existentialist philosopher, whose natural
medium was dialogue. Founder of the Budapest Dialogical School, with life-long colleague Béla Tábor,
in 1936 they co-authored Indictment against the Spirit. A radical critic of the dominant schools of
thought of the time, Szabó declared himself “anti-organisation”, a position he retained throughout
his life, whilst following progressive artistic and social movements. Surviving Auschwitz, Szabó
played an important role in the European School art movement (1945 - 1948), and participated in intense
discussions with his closest peers in "Thursday Conversations” and seminars, all disbanded with the
strict implementation of the Zhdanov Doctrine.

Towards the end of his life, having left Hungary in 1956, he expressed his inner thoughts in the form
of enigmatic drawings resembling calligraphies. Completed in a single line, in a vast number of variations
and repetitions, some works can be read as a face, an exclamation mark, a cross, a diagonal, or initial L.
Others are harder to classify, and even harder to read. Szabó often signed his drawings with the letters AO,
which we might trace to his philosophical position (anti-organisation) or to the letters in his name; they
manifest as visual symbols in his work. A large body of his drawings survive in public and private
collections. The aim of this small exhibition is to introduce some of his works, ask what an individual
gesture might say about a life, and initiate a broader debate about what makes someone an ”artist”.