Through Wind and Ice: Communicating the Climate Crisis 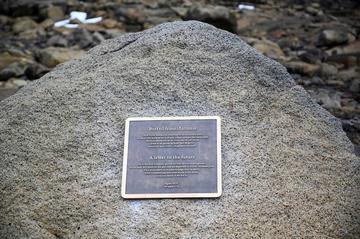 In October 2020, California experienced its first “gigafire” – a burn event of over 1,000,000 acres; but of course, this is just one instance of climatological precarity among a long and growing list of others. Stories such as these do motivate some people to action. But, we also see that much of the public discourse surrounding environmental deterioration continues to pivot upon policy and science messaging that, while substantively essential, may not always appeal to the affective, sensed or felt dimensions of the environmental harms multiplying around us. In this presentation, we draw from two of our anthropological research projects—the first on wind power development in Mexico and the other on the loss of ice in Iceland—to highlight alternative forms of climate communication that are research-driven and public-facing. Our work on aeolian politics in Mexico and our collaborative text, a “duograph,” begin the discussion and we close with reflections on our August 2019 installation of the world’s first memorial to a fallen glacier, Okjökull.

Cymene Howe is Professor of Anthropology at Rice University. Her books include Intimate Activism (Duke 2013) and Ecologics: Wind and Power in the Anthropocene (Duke 2019), which follows the human and more-than-human lives intertwined with renewable energy futures. She is co-editor of The Johns Hopkins Guide to Theory and the Anthropocene Unseen: A Lexicon (Punctum 2020). Currently, her research is focused on adaptive responses to ice-loss in the Arctic region and sea level rise in coastal cities around the world. With Dominic Boyer, she produced the documentary film Not Ok: A Little Movie about a Small Glacier at the End of the World (2018) and, with Icelandic partners, installed the world’s first memorial to a glacier felled by climate change. The Okjökull memorial event in Iceland served as a global call to action and in memory of a world rapidly melting away.

Dominic Boyer teaches at Rice University where he also served as Founding Director of the Center for Energy and Environmental Research in the Human Sciences (2013-2019). He is currently pursuing ethnographic research with flood victims in Houston, Texas, and on electric futures across the world. His most recent book is Energopolitics (Duke UP, 2019), which is part of a collaborative duograph, “Wind and Power in the Anthropocene,” with Cymene Howe, which studies the politics of wind power development in Southern Mexico. With Howe, he also helped make a documentary film about Iceland’s first major glacier (Okjökull) lost to climate change, Not Ok: A Little Movie about a Small Glacier at the End of the World (2018). In August 2019, together with Icelandic collaborators they installed a memorial to Okjökull’s passing, an event that attracted media attention from around the world.