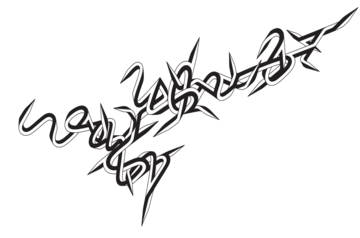 In this in-conversation event, internationally acclaimed artist Enrico Isamu Oyama shares insights into this artistic practise, his hometown Tokyo and the Japanese art scene. Living in New York and Tokyo, he has created countless paintings and murals, linking aerosol 'graffiti' culture with abstract art and Japanese tradition. Enrico was recently commissioned by the Ashmolean Museum to create new works for the Tokyo: Art & Photography exhibition. 'Tokyo is an intense, sometimes stressful place, which produces a unique creativity,' he says, 'I feel my art is definitely influenced by the environment of Tokyo, which I grew up in'. 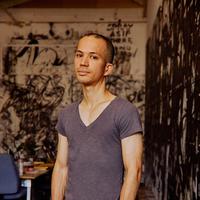 Enrico Isamu Oyama creates visual art in various mediums that features Quick Turn Structure: the motif composed of spontaneous repetition and expansion of free flowing lines influenced by aerosol writing of 1970’s-80’s New York and beyond.
Oyama was born in Tokyo to an Italian father of Bavarian descent and a Japanese mother. While growing up there, the family had visited Veneto region in North Italy every summer for more than 2 decades. Going back and forth experiencing Tokyo as megalopolis and North Italy as quiet countryside trained him to view the world from different angles.
Oyama became interested in aerosol writing around the time he lived in Veneto in 2000-01. After returning to Tokyo, he started drawing a line pattern in black and white with three-dimensional depth. Oyama established it as his style in Tokyo underground art scene through early to mid 2000's. 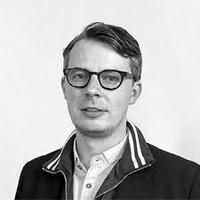 Jason Waite is an independent curator and cultural worker focused on forms of practice producing agency. Recently working in sites of crisis amidst the detritus of capitalism, looking for tools and radical imaginaries for different ways of living and working together. He has co-curated Don't Follow the Wind an ongoing project inside the uninhabited Fukushima exclusion zone, The Real Thing?, Palais de Tokyo, Paris, Maintenance Required, The Kitchen, New York, and White Paper: The Law by Adelita Husni-Bey at Casco – Office for Art, Design and Theory, Utrecht where he was curator. He holds an M.A. in Art and Politics from Goldsmiths College, London and was a 2012-2013 Helen Rubinstein Curatorial Fellow at the Whitney Museum Independent Study Program, New York. Presently, he is a doctoral candidate in Contemporary Art History and Theory at the University of Oxford in the Ruskin School of Art and Christ Church. 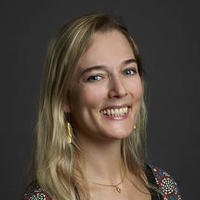 Lena Fritsch is the Curator of Modern & Contemporary Art at the Ashmolean Museum, working on exhibitions, displays and acquisitions of international art. She co-curated the Ashmolean's current exhibition Tokyo: Art & Photography. Lena used to live in Tokyo and one of her main research areas is Japanese art of the 20th and 21st centuries. Before joining the Ashmolean, she was a curator at Tate Modern. In 2018 Fritsch published the first overview on Japanese photography in English: Ravens & Red Lipstick: Japanese Photography since 1945 (Thames & Hudson; Japanese version with Seigensha). Other publications include A.R. Penck: I Think in Pictures (2019), Giacometti (2017), an English-language version of Moriyama Daido’s Tales of Tono (2012), The Body as a Screen: Japanese Art Photography of the 1990s (2011), and Yasumasa Morimura’s Self-Portrait as Actress: Überlegungen zur Identität (2008). Fritsch holds a PhD from Bonn University, and also studied at Keio University, Tokyo.

Follow the link to the Tokyo: Art & Photography exhibition.