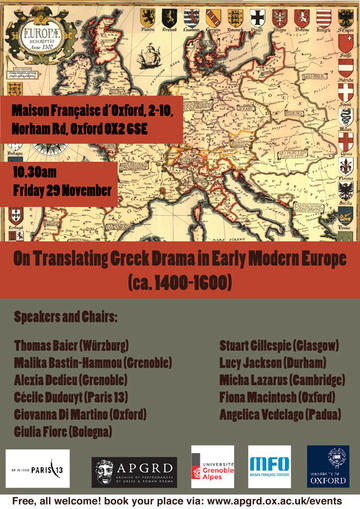 Co-convened by Malika Bastin-Hammou (Grenoble), Giovanna Di Martino (Oxford) and Cécile Dudouyt (Paris 13) and co-hosted by both the APGRD and the MFO.

This one-day symposium hosted by the MFO and the APGRD is the second event in a series spanning translation in the early modern period. As the first conference, this second one, too, is premised on the fact that understanding the early-modern reception of ancient tragedy is a cross-cultural, multilingual and collective effort.

The symposium aims is to bring together researchers specialising in 15th- and 16th-century ‘theories’ around translating Greek drama in Europe (starting with Italy, France, Germany and England) so as to draw out common ’trends'. Many recent publications and symposia have focused on early modern translation of ancient Greek drama into Neo-Latin and the vernacular languages throughout Europe (Traductions savantes vers le latin, Lyon 2013; Les traductions latines du théâtre grec, Anabases, 2015; Greek Drama in Latin 1506-1590. Readership, Translation, and Circulation, King’s College London 2018; Translating Greek Tragedy in 16th-century Europe, Oxford, APGRD, 2018). Similarly, interest about early-modern theories and theoreticians of translation has grown considerably in the past few years  (P. Botley, Latin Translation in the Renaissance, Cambridge, 2004; Learning Greek in Western Europe, 1396-1529, Philadelphia, 2010). The objective of this conference is to combine the two approaches and reassess the conceptual writings produced at the time of the first translations of Greek drama – from the 15th century, when the first tentative theories emerge, to the end of the 16th century, when ancient Greek drama are translated extensively.