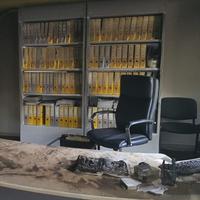 'HIV/AIDS in Greece: A political archive'

HIV/AIDS in Greece: A political archive

Both a public engagement programme and a queer archive project, this Knowledge Exchange Fellowship allows Dimitris Papanikolaou and a team of researchers the necessary time and funds to work together with Thetiki Foni (Positive Voice), the Greek Union of People Living with HIV, in order to create the foundations for a community-run ‘HIV/Aids archive’ in Greece.

In the first instance the project addresses a common observation among activists and scholars, that secrecy regarding the disease in the 1980s and 1990s and the absence of sustained public engagement with its impact on the lives of individuals and the Greek queer community, belie deeper anxieties over public health, and sexual and dissident identities. It also points towards a tendency of kinship networks to substitute and close(t) down functions of the public sphere. AIDS in Greece very much remained “a family matter”, and the secrecy often surrounding it also meant a lack of public mourning for its victims, as well as the disavowal of the political ramifications a more public fight against HIV/AIDS could have had in Greek society. Retelling the cultural and social history of HIV/AIDS in Greece today, therefore, also means remembering efforts that have tried to render the fight against the disease more public in the past, as well as their official or unofficial undermining; reconstructing important scenes of (community) trauma, stigma and survival; collecting unclaimed memorabilia, cultural texts, testimonials. The current project cannot exhaust all these undertakings, but it can certainly open the discussion, and lay the foundations for a public and participatory archive. The initial steps of the fellowship have also helped us realize that such an undertaking directs itself to a series of interrelated (and similarly disavowed) archives, among others:

For all those reasons, the social history of HIV/AIDS cannot but be thought of as a political archive, whose importance and topicality become all the more felt today in Greece; only last March, for instance, Thetiki Foni’s main checkpoints in Athens became the target of an arson attack by unidentified assailants.

In public talks and roundtables that will take place throughout 2019-2020 (culminating in March - June 2020), the project will therefore address this perceived lack in the public history of HIV/AIDS in Greece. It will ask why this lack occurred in the first place. It will try, through activist engagement, scholarly exchange and public dialogue, to add to the existing narratives of the impact of the disease on Greek society with a specific reference to the queer community. Last, but not least, it will contemplate the difficulties of addressing this history today, and its political ramifications.

a) the publication and ongoing development of a website (that will go live in February 2020 and will be further built up during the year of the fellowship). It will provide short bibliographical essays on various aspects on HIV/AIDS in Greece (from an overview of published scholarship, to a discussion of literature, theatre and cinema; from accounts of past community projects to overviews of media panics and official campaigns). The website, at the same time, will serve as a hub for the collection of further material, testimonials and written reflections.

b) the foundation of an archival collection run by Thetiki Foni; it will document its own history and activities, but also expand to include material and testimonies related to HIV/AIDS in Greece since the 1980s. The aim of the fellowship is to help Thetiki Foni decide on the status and exact nature this collection will take, and to learn from the experience and the difficulties of its foundation. It is hoped that the full organization of such a larger and expansive archive will be the objective of a future related research project.