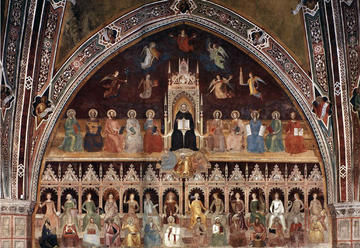 Please click here for more information about the conference.

From the modest group of St Dominic and his sixteen followers, the Dominican Order grew rapidly in the first century of its existence, establishing itself across Europe as a learned Order of Preachers.  This interdisciplinary conference will seek to explore the influences of the Dominican Order on all aspects of medieval life.  The conference theme of ‘influence’ can be interpreted in its broadest sense, encompassing the large-scale influences of the Order and the legacy of its prominent figures, or can be examined on the personal level, such as the impact that the Order had on those that came into contact with it, both within and outside the Order.

- how the Dominican Order influenced other religious orders and medieval life more generally (papers may consider this influence with regard to art, architecture, universities and education, book-making, theology, liturgy, legislation, or other relevant disciplines);
- influential Dominicans, such as St Dominic, Humbert of Romans and Thomas Aquinas, and their legacy to the Dominican Order or the use of their teachings outside of the Order;
- preaching and other means by which Dominicans sought to influence the local populations they encountered;
- controversies resulting from Dominican influence (e.g., in the universities, in ecclesiastical government, etc.);
- Dominican education and the training of novices: the shaping of the Dominican religious life.

The conference will be held at Lincoln College, Oxford and Blackfriars, Oxford from Thursday 10th to Saturday 12th September 2015.  This conference is interdisciplinary and open to scholars working in any field of medieval studies.  Papers of 20 minutes are welcomed, although other formats may be considered.  Please submit an abstract of no more than 300 words, and include with it your paper title, name and affiliation (if any), contact email, AV requirements, and a short biography (this has no bearing on the evaluation; it is simply for distribution to chairs).  All abstracts should be submitted by 1st March 2015.

All enquiries and proposals should be sent to Eleanor Giraud: eleanor.giraud@lincoln.ox.ac.uk