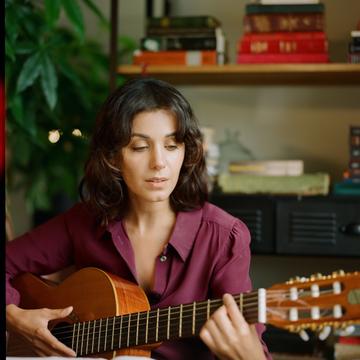 Over the 2021/22 academic year, Katie Melua joins us as a Humanities Cultural Programme Visiting Fellow. Katie Melua will collaborate with a select group of students and faculty from Oxford University and Oxford community organisations to create an original musical story inspired by Professor Peter Frankopan’s best-selling book, The Silk Roads. This unique songs-based project will be presented at Oxford’s Sheldonian Theatre on Thursday 28 April 2022.

Katie Melua says: “I believe that songs are one of the most potent carriers of culture, human experience, and story-telling. I have forever felt that universities are the source of cutting-edge thinking and cultural development, but rarely do I see the two playgrounds of musical artistry and academic study come together. I have practices and theories learnt over the years that I’m excited to share with these young creatives, and I’m also looking forward to learning from them and being challenged by them.

I have great respect for traditional forms, which we’ll look at and explore alongside newer ways of composing. We’ll explore where words meet music, the sound design of lyrical composition, and how to weave great stories into the form. As an immigrant moving from Georgia to the UK at a young age, I have a deep respect for how culture moves across land, time, and space, and have turned to Professor Peter Frankopan’s The Silk Road as a source of inspiration for this very unique journey with the students and faculty of Oxford University.”

Katie Melua is one of Britain's most successful musical artists, having sold in excess of 11 million albums and received over 56 platinum awards. The 36-year old is originally from Tbilisi, Georgia and moved to the UK at a young age where she studied at the acclaimed Brit School of Performing Arts.

It is her extraordinary voice, and the ability to truly inhabit a song, that has been her trademark since the young 19 year old school graduate first appeared in 2003 performing The Closest Thing To Crazy. One of the UK’s highest-selling female recording artists of all time, Katie has released 8 top 10 studio albums – ‘Call Off The Search’, ‘Piece By Piece’, ‘Pictures’, ‘The House’, ‘Secret Symphony’, ‘Ketevan’, 2016’s self-produced, critically acclaimed ‘In Winter’ and most recently ‘Album No. 8’ in 2020, which debuted at #7 in the UK’s Official Album Charts.

An accomplished songwriter, composer, and arranger some of Melua's most well-known hits include Nine Million Bicycles, The Closest Thing to Crazy, and her now infamous cover of Wonderful Life. A constantly in-demand touring artist, Melua enchants her audiences worldwide with her uniquely powerful and captivating voice, flawless performances, and charming personality.

Humanities Cultural Programme, one of the founding stones for the
Stephen A. Schwarzman Centre for the Humanities.