Kingship and the Bible in the Middle Ages 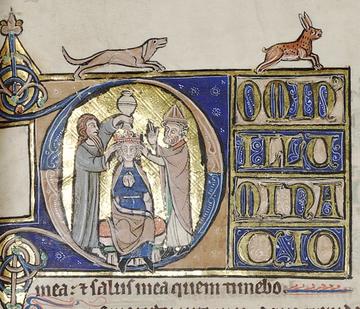 A one-day workshop 'Kingship and the Bible in the Middle Ages' on Friday 18 March 2016 to be hosted by Oxford Medieval Studies (OMS) at TORCH, University of Oxford. Featuring the keynote lecture ‘Whatever happened to Rehoboam and Jeroboam? Uses and non-uses of Biblical models in high medieval kingship narratives’ by Professor Björn Weiler (Aberystwyth University)

The Bible bequeathed to posterity numerous models of kingship, including, but certainly not limited to, the Old Testament kings of Israel, and the New Testament figure of Christ the King of Heaven. Notions of kingship centred upon the Bible proved to be hugely influential throughout Christendom in the Middle Ages. Previous generations of historians often argued that the models of biblically-inspired kingship which prevailed in the Early Middle Ages (under dynasties such as the Carolingians and the Ottonians) were less influential in the Central and Later Middle Ages, as royal dynasties of those eras adopted paradigms of kingship that were driven by administrative and bureaucratic practices. However, recent scholarship has begun to call this argument into question, showing that from the Central Middle Ages onward the royal dynasties of kingdoms such as France and England maintained practices of kingship that were inspired by the Bible, while simultaneously strengthening their administrative capability. Modern scholarship on the use of the Bible in the creation of images of kingship in the Middle Ages thus stands on the cusp of a critical new phase. The purpose of this workshop is to explore the manifold ways in which biblical motifs were used in the Middle Ages to construct images of kingship (and/or queenship) between c.750 and c.1450. Participants will discuss the state of current scholarship on the broader field of medieval kingship, and consider how writing on this area of medieval history might subsequently progress.

Potential topics for twenty-minute papers might include, but are not limited to:

• Comparison between Old and New Testament models of kingship
• Comparative studies of royal dynasties across time and space, or between Western/Latin and Eastern traditions of kingship
• The manipulation of liturgy, the liturgical calendar and feastdays by royal dynasties
• The use of the Bible in royal ritual, including inauguration and coronation practices
• The use of the Bible and biblical exegesis in political thought on kingship
• Studies of manuscripts closely associated with particular monarchs or royal dynasties
• The relationship of ‘sacral kingship’ to ‘administrative kingship’

Proposals for twenty-minute papers as well as any queries about the workshop should be sent to Simon John via email (simon.john@history.ox.ac.uk) by Monday 25 January 2016. Proposals should be a maximum of 300 words long. The final conference programme, and details for registration, which will cost no more than £5, will be announced in early February 2016. Proposals from postgraduates and early-career scholars are particularly welcomed.

Click here to view the call for papers poster.