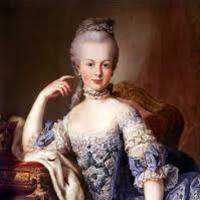 'Marie Antoinette: A Life in Objects'

Catriona Seth has published widely in French on Marie-Antoinette (incl. Marie-Antoinette. Anthologie et dictionnaire, Paris: 2006, 960 pp.) and has an edition of her letters to the Austrian ambassador in the pipeline. Many UK public collections own series of objects relating to Marie-Antoinette. Marie-Antoinette - A Life in 5 Objects intends to build on both these strengths by using CS' knowledge of Marie-Antoinette to reach an English-speaking public via the presentation of objects in British public collections, particularly in the British Museum. The objects will be put at the heart of five 15' broadcast quality podcasts to be presented by Catriona Seth in collaboration with curators, starting with Barrie Cook, Curator of Medieval and Early Modern Coinage at the British Museum.

The podcasts will be produced by Chrome Radio and constitute the main legacy of the project. They will be made available via the project partners and present a tangible link of the collaboration. They will have a reach beyond academia and be of interest to a general public of all levels. There will also be blogposts and a skills seminar for students and staff in handling and presenting objects to communicate research.

Catriona Seth will gain skills in handling and presenting objects and learn about conservation and material culture. She will then prepare contextualised presentations for the podcasts. There is a transferable element to the project which reaches students and staff on the one hand and the wider public on the other. She will also use the skills for the AHRC-funded network project she has undertaken with Prof. N. Watson of the Open University. In a post Brexit scenario, the extension to France via the French-language podcast to be prepared in Paris in the context of the Conciergerie Marie Antoinette mania exhibition for which the British Museum is loaning objects will be a welcome extension.