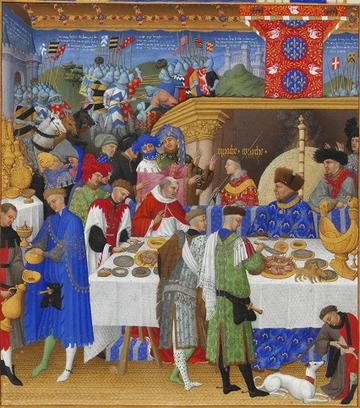 Late medieval European court cultures have traditionally been studied from a mono-disciplinary and national(ist) perspective. This focus has obscured much of the interplay of cultural performances that informed “courtly life”. Recent research has begun to reverse this, focusing on issues such as the tensions between orality, writing, and performance; the sociocultural dimensions of making and owning manuscripts (musical and otherwise); the interstices between musical, literary and visual texts and political, social and religious rituals; and the impact of gender, kinship, and social status on the genesis and transmission of culture and music.  These “new medievalist” studies have significantly enhanced our understanding of the cultural meanings of singing, listening, and sound in late medieval times.

Towards a new approach

MALMECC will, for the first time, systematically explore late medieval (c. 1280-1450) court cultures and their music synoptically across Europe. England, the Low Countries, Avignon, Bohemia, south-eastern Germany/Salzburg, Savoy, and Cyprus have been selected for study as each was a vibrant site of cultural production but has been relatively neglected due to prevailing discursive formations favouring “centres” like Paris and Florence. Linking these courts in a large-scale comparative study focused on the role of music in courtly life but embedded within a multidisciplinary framework encompassing all the arts as well as politics and religion will reveal the complex ecology of late medieval performances of noblesse in unheard-of depth while at the same time throwing the unique qualities of each court into distinct relief. The project will apply an innovative research paradigm that develops a trans-disciplinary and post-  national(ist), “relational” approach to the study of music in late-medieval court cultures. In doing so it will integrate all late medieval arts and re-constitute the fullness of their potential meanings.

MALMECC is an attempt to rewrite the history of music in late medieval Europe. Throughout its five-year programme, the project will host two major public events; a  workshop in Spring 2017, and a large-scale international conference during the fourth year (2019). In addition, we look forward to regular scholarly exchanges within the research team as well as between the research team and visiting scholars, members of the advisory board, and research postgraduates throughout the grant period. The results of our work will be accessible through university presses and on our website.

Our website featuring details of events, publications and a project blog can be found at www.malmecc.eu.  We are also on Twitter at @malmecc.