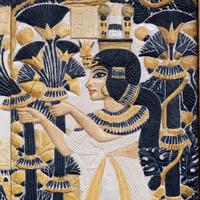 This is a two-part project that focuses on Egypt: Ancient Egypt and modern Egypt. The purpose of the project is to undertake and complete the initial research that will enable me to apply for funding for a follow-on project of larger scale. That project will see the creation of a new piece of music that can be performed as part of the anniversary celebrations in 2022 of the discovery of the tomb of Tutankhamun with texts selected from the literature of Ancient Egypt. The second part of the follow-on project will ultimately see the publication through audio recordings of a collection of Egyptian songs written in the twentieth century, reimagined and orchestrated into modern performing editions.

Before that can be contemplated, however, much work is to be done on the identification and re-discovery of the twentieth century songs (no performance materials whatever are available) and the copyright issues that surround them, either the music or the text. Selections also have to be made so as to create a coherent collection with interesting social and musical context. These initial stages are the purpose of this project.

For the new work, much work has to be done on the selection of texts to be set and the instrumentation that could be used in the score, both of which will be achieved through this project. The key participants in the project are the partner organisation Oxford Maqam, a specialist Egyptian music performance group with expertise on twentieth century Egyptian repertoire and a great interest in that which is to be uncovered, and the international Egyptian soprano Fatma Said, with whom I have already collaborated during the past four years on prototype selections from the twentieth century repertoire.

In both parts of the project, I will work alongside others in Oxford: Professor Richard Parkinson, Professor of Egyptology and The Griffith Institute (Tutankhanum) and Dr Darci Sprengel (twentieth century).