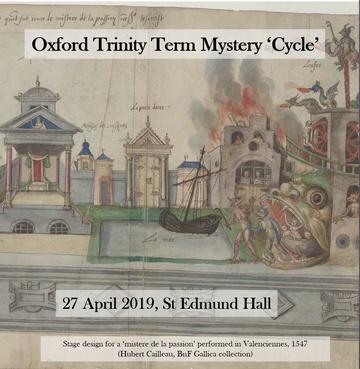 A cycle of medieval mystery plays performed by various groups around St Edmund Hall at various locations. All welcome!

Would you like to take part in a medieval dramatic experiment?
Directors, actors, costume and prop makers and musicians wanted!

We’ve now finalised the plays we hope to do for our ‘Oxford cycle’ in the spring. We are looking to recruit a group to take on each play; as well as Oxford, we’re going to ask medievalists in York, Bristol and elsewhere, if they want to take part. We decided that (since this is our first attempt), we wouldn’t attempt an entire existing cycle. Instead, we’ve drawn what we hope are very good plays from a variety of sources, which give an outline of the whole biblical story. We (or a volunteer!) will write short bridging passages where they’re needed, between the plays, to fill in the story.

This is the list of plays we hope to produce:

13. Harrowing of Hell (The Deliverance of Souls)      Towneley

These require a very varied number of actors – from 2 to about 10 – and a wide variety of props and ingenuity in setting: we hope people will use their imagination for how to stage Creation, Noah’s Ark or the Crucifixion. We intend to allow each group a free hand as to how they wish to stage their play, as long as they stick to the text. Some may work to be as faithful as they can to the medieval staging; others may wish to be more stylised or modern.

We will provide the text for each play, but we’re using the plays in modern spelling as found in:

These editions have textual and production notes, which directors will want to read.

The play date is the Saturday before 1st week in Trinity term: 27th April. At the moment, we imagine starting about 10am, and then playing right through, continuously. The audience will sit on the grass surrounding the performers, moving around to the different ‘stages’. We’ll have a party in the evening for the entire cast and crew. We are staging the plays outdoors on four sites in the front quad of St Edmund Hall and around the former church of St Peter in the East, which is now the college’s library.