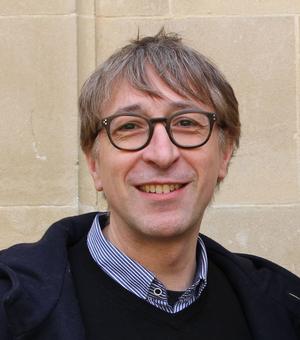 Associate Profesor of English, Fellow and Tutor in English at Trinity College Oxford

After completing my doctorate at Oxford in 2003, I held Research Fellowships at the Bristol Institute of Greece, Rome and the Classical Tradition and at Merton College, Oxford. I joined Trinity College in 2006. Since then I have taken part in several international collaborations with institutions that include the Humboldt University, Berlin, and Chuo University, Tokyo. I have recently been made a fellow of the Centre for British Studies, Berlin.

My work explores the links between English literature and a number of other disciplines, including classics, modern languages, and the history of sexuality. Its historical focus is on the nineteenth century, especially Aestheticism and Decadence. I am committed to comparative approaches and am particularly interested in the cultural and literary exchange between Britain and Italy, France, Germany and the Scandinavian countries.

My first monograph, British Aestheticism and Ancient Greece: Hellenism, Reception, Gods in Exile (2009) uncovers the radical reinterpretation of Ancient Greek culture undertaken by Walter Pater, Vernon Lee, Michael Field and Oscar Wilde. By bringing together male and female, canonical and marginalised authors, I sought to challenge the perception that classics was the preserve of Oxbridge-educated men, and revealed instead a plurality of modes of engagement with the past and the complex dialogue between classical scholarship, art criticism and creative writing. This book was followed by edited collections on the European reception of Oscar Wilde (2010), the arts in Victorian literature (2010), the Victorian poet A.C. Swinburne (2013) and cosmopolitanism in late nineteenth-century European literature (2013). Further collections on Walter Pater the classicist, Arthur Symons and literature and sculpture at the fin de siècle are in preparation.

My main research activity at the moment is writing a monograph on cosmopolitanism in the Victorian fin de siècle provisionally entitled The Love of Strangers. This project was awarded an AHRC fellowship in 2014-16. I want to show that the end of the nineteenth century, a period that in Britain coincided with the height of imperialism, witnessed a debate around cosmopolitanism that changed the way in which writers and readers understood the relationship between the national and the global, generating new ways of writing, reading, translating and circulating texts. Key authors with whom I engage in this project include Oscar Wilde, George Egerton and the Japan-based Irish writer Lafcadio Hearn. I am also interested in international periodicals in this period, especially those written in artificial languages such as Esperanto.

Together with my colleague Gesa Stedman of the Centre for British Studies (Humboldt University), I coordinate the international research network Writing 1900, which studies cross-national literary traffic in the late nineteenth and early twentieth century. In 2017 we plan to bring out a special issue of Forum in Modern Language Studies dedicated to the sense of place and international literary communities. I am also currently leading a collaboration between Oxford and the EHESS and CNRS, Paris (group led by Gisèle Sapiro) on the topic of cosmopolitanism and the transnational literary field.