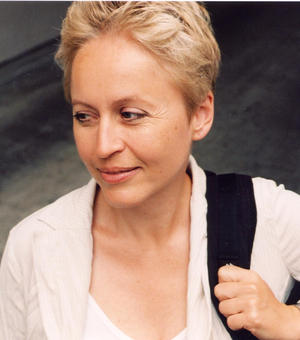 Born in Munich in 1962, Ulrike Draesner studied English literature, philosophy and German literature in Munich and Oxford (St John’s College, Balliol College) and was awarded her Ph.D. in 1992. She lives in Berlin and works as a poet, critic, a writer of long and short fiction and a translator of French and Anglo-American poetry. Apart from numerous appearances in anthologies and magazines, she has published five major poetry collections with Luchterhand most recently sub songs (2014). Her first novel appeared in 1998, followed by further novels: Mitgift (2002), Spiele (2005) and Vorliebe (2010). Collections of short stories appeared in 2004, Hot Dogs, and 2011, Richtig liegen. Geschichten in Paaren.

She also works as an author of essays on media and cultural change and has been involved in a number of multimedia collaborations, including a space poem for Hong Kong and Calcutta, and participation in various internet projects and video experiments. She has been awarded a number of residencies in Germany and abroad, and teaches part time as a Professor for Creative Writing at the Deutsches Literaturinstitut Leipzig. For her poetry and prose she has also received various literary awards, most recently the Joachim-Ringelnatz-Preis for poetry 2014. Her most recent novel, Sieben Sprünge vom Rand der Welt, was published in March 2014. It develops a chorus of voices chart the consequences of forced migration in Middle and Eastern Europe from 1939 to the present day and was nominated for the German Book Prize.