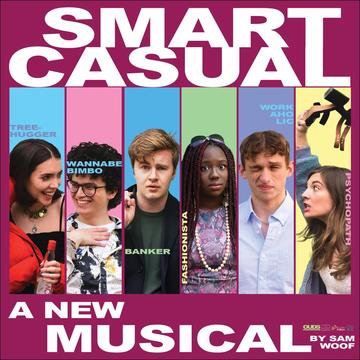 Project Lead:
Livi Van Warmelo
Faculty of Music
Musical Director
Partner Organisations:
North Wall Arts Centre
Cockpit Theatre, Marylebone
About the show:
Created by University of Oxford students and GOYA Theatre Company, Smart Casual is a fresh, new musical. Told over 18 months, Smart Casual follows six inseparable friends as they leave university, fall in love and fall apart. Accompanied by a sharp musical score, a comic script and a narrative that explores sex, class, and loneliness, Smart Casual is a story about trying to figure out life and in all its complexities. It’s about the gap between what we feel and what we say.
Six humorously identifiable characters bring this show together: Mel, the heart of the group; Jordan, arrogant upon first impression but really he’s just looking to belong; Ben who keeps things casual and owns eight identical black hoodies; Lily, headstrong and successful – the epitome of ‘Head Girl’ energy; Willow, the one who wants to see the world and believes in yoga; and Marc, quick-witted and theatrical with a mean edge. Bordering between romantic comedy and tragedy, this intimate ensemble piece appeals to audiences both young and old, by offering a heartfelt, honest, yet comical depiction of modern life, highlighting in particular the loneliness of generation Z.
Premiering at the North Wall Arts Centre in July 2021, Smart Casual will then transfer to the Cockpit Theatre in Marylebone in August.
Contact:
theatregoya@gmail.com, or alternatively please visit our website at www.theatregoya.com.