The Folio of the Future 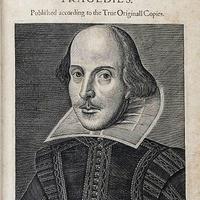 'Folio of the Future'

Emma Smith has been working with the Royal Shakespeare Company on two related projects. The first was the development of plans for a dedicated exhibition space in the Swan Theatre in which their copy of the Shakespeare First Folio will play a starring role. Her work on the publication and early reception of the book helped with conversations about how to tell a narrative of ongoing interpretation informed by the RSC’s rich archival holdings. Aspects of the book’s stage directions, its record of actors’ names at places where we might expect the name of the dramatic character, and its encoding of aspects of its performed past has all helped to animate the story of stage reinventions in Stratford over the last century. The RSC copy of the Folio also has a number of unique features and marks of use that tell stories of Shakespeare’s reception, and in particular we want to use the energetic seventeenth-century approval of aspects of the plays indicated by a hand-drawn manicule (pointing hand) as a way to connect with contemporary ways of indicating enthusiasm (the Facebook ‘like’ icon has some striking similarities).  The output here aimed at a physical and virtual exhibition (78% of funding is already secured) that will open up the RSC’s unique perspective on the potential of Shakespeare’s plays to a wide public, and harness the extensive reach of its Events and Exhibitions, Education and Digital departments to engage theatre audiences, school and college groups, and the thousands of tourists to Stratford. The second, related, strand of the project involved work reconceiving the theatrical archive for the digital age. We are in the scoping phase of a digital theatre archive to preserve, curate, and animate the records of performance. Emma's time as KE Fellow has been spent spent in liaison with the RSC’s digital development and creative teams to scope out the technical, creative, and academic contours of a digital ‘casebook’ for a single play – Henry IV Part 1. The aim of the digital casebooks was to open up a curated experience of the theatre archive online, which was of demonstrable (through metrics) benefit to students of literature and of drama in schools and universities, as well as to academics and to the wider theatre-going public.