The Indian Army in the First World War: An Oxfordshire Perspective 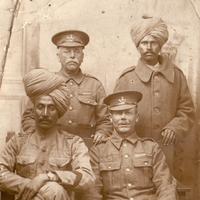 'The Indian Army in the First World War: An Oxfordshire Perspective'

Knowledge Exchange Fellow:
Dr Priya Atwal (no longer at the University of Oxford)

The aim of this project is to investigate and highlight the overlapping, but largely overlooked experiences of men from India and Oxfordshire, in fighting for the British Indian Army in Mesopotamia during the First World War.

The academic research for this project will afford a chance to explore the nature of local, global and imperial connections in the history of the conflict - drawing upon previously unstudied archival material from the private collections of the Soldiers of Oxfordshire Museum (SOFO).

Funding provided by TORCH will also facilitate the hosting of public events in 2017-18 at local museums, targeted at British-Asian families, to enhance the public outreach activity of the newly-launched exhibition on 'the Indian Army and the First World War' (produced by Dr. Atwal's team for a previous, AHRC-funded project). It will additionally allow the KE Fellow, Dr. Priya Atwal, to work in collaboration with SOFO's curatorial and outreach team to create fresh educational resources based on the project's findings and SOFO's newly-interpreted Indian collections. These will then be used by the museum's Education Officer for inclusively engaging a diverse range of schoolchildren in learning about the global and local dimensions of the First World War, and will be of particular use to SOFO to support teaching relating to the centenary commemorations of the war's end.

Altogether, this project will not only produce important academic insights relating to the transnational impact of the First World War; but it will equally empower SOFO and other local partner museums (Wycombe and Banbury) to make constructive strides towards engaging with BAME audiences, on the basis of new and exciting research from hitherto unexplored archives and perspectives.