The Madhyamavyyoga: A Sanskrit Play in the Ancient Dramaturgical Tradition 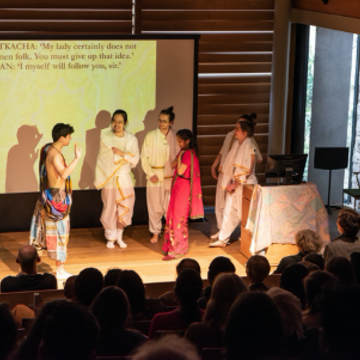 Oxford Centre for Hindu Studies, A Recognised Independent Centre of the University of Oxford

The core project of ‘the Madhyamavyyoga: A Sanskrit Play in the Ancient Dramaturgical Tradition’, funded by Torch, is to deliver an ancient one-act play of Bhāsa written in Sanskrit. We successfully staged the ancient script in its original form on the 09/03/2020 at Queen’s College. The captions of the Sanskrit chanting and dialogue were projected to the background screen for the 90-odd non-specialists. 20-min talk 'Emotions in a Dead Language' by Dr. John Lowe was preceded the hourlong performance to introduce the play and the Sanskrit language to the high school students. The play was a trailblazer in Sanskrit play and it proved itself to be more than a public performance. It was a learning and researching opportunity for almost every Sanskrit student at the Faculty. It was also a major outreach event for the admission, recognition, and general interest of the admittedly less known department. Audience from local high school students was introduced to the field and the life at Oxford and the public audience was intrigued by its versatile poetic metres, dramatic elements, and common humanitarian concern. The fund helped transform our production level and outreach effort by bringing in world experts and by inviting targeted audience. We are hoping to continue our endeavour in the near future.