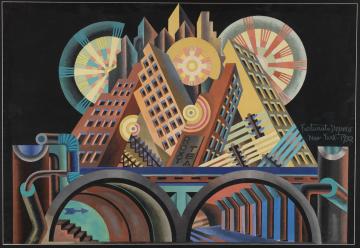 This network built on scholarly interest from across the humanities and social sciences to form an interdisciplinary hub at Oxford for the study of auditory culture within the modern urban environment (post-1850). We were interested in investigating ways in which sound and music enhanced our understanding of urban design and experience—both historically and in the present—and how sound and music could contribute to a theorisation and history of the modern city. The network’s aim, then, was to draw together people working on sonic and spatial studies in various disciplines under the banner of ‘urban humanities’—an important new scholarly field.

The project’s scope was twofold. On the one hand, it was historically-oriented: through the metaphor of urban rhythmic patterns we hoped to unveil the changing socioeconomic realities of urban spaces over the last century and a half, and how these resurfaced in creative ways among authors, painters, composers, singers, filmmakers, etc. On the other hand, the network also engaged with our modern predicament. We believed that the sonic culture of our present owed much to our urban past. While we hoped that Urban Rhythms would lead to a new wave of collaborative scholarly analysis and research, we also wanted to draw this academic endeavour into an engagement with our local environment. What is the politics of sound in the city? How can understanding the relationship between sound and the city historically aid future city development and design?

The network primarily comprised a series of workshops and reading groups.