The shortlist for the Oxford-Weidenfeld Translation Prize, administered by OCCT, was released this week! The shortlist is:

The winner will be announced at a prizegiving and dinner at St Anne’s College, Oxford on Saturday 11 June. Shortlisted translators are invited to introduce their work, and read extracts. This will be the crowning event of Oxford Translation Day, which boasts a varied programme of talks, workshops and readings. Details are available at http://www.occt.ox.ac.uk/oxford-translation-day-2016.

In Week 5 the third meeting of this term’s OCCT Discussion Group on Multilingualism will take place on Tuesday of week 5 (24 May), at 12.45-2pm, in Seminar Room 6, St Anne's College. (Please note the change of room!) As usual, a sandwich lunch will be provided.

In Week 4, we had the Fiction and Other Minds seminar: http://www.occt.ox.ac.uk/embodied-spaces-embodied-minds. The seminar explored the rich interplay between the rhetorical details of literary texts and the way they draw on and appeal to our embodied experience beyond literature.

How does geographic and cultural displacement change what we can say and write? Is there a poetics of displacement? This event takes as its starting point work done in creative writing workshops in Palestine and the UK to explore these questions. Join the Watadd Research Network for a reading, a discussion, and a little live writing.  The session is chaired by Steve Willey (Birkbeck College, University of London) with presentations from Julian Maynard Smith, Atef Alshaer and Damian Gorman (short bios below).

Julian Maynard Smith is an artist, performer, theatre writer and director. He is the Artistic Director of Station House Opera and one of the directors of At Home in Gaza and London (Al Meshal Theatre, Gaza, and Watermans Art Centre, Brentford) recipient of a LIFT Digital Utopia Award.

Atef Alshaer is a lecturer in Arabic Language and Culture at the University of Westminster. He has several publications on the Arab world in the fields of language, literature and politics. He was educated at Birzeit University in Palestine and the School of Oriental and African Studies, University of London, where he obtained his PhD and taught for a number of years. He is the author of Poetry and Politics in the Modern Arab World, and co-author of The Hizbullah Phenomenon: Politics and Communication.

Damian Gorman is an award winning poet, editor, broadcaster and screenwriter. He currently works as a consultant and facilitator on City University London’s unique Olive Tree Programme which brings together Israeli and Palestinian students. He is a recipient of an MBE for services to the arts.

The Fifth Euroacademia Global Forum of Critical Studies aims to bring into an open floor the reflexive and questioning interaction among academics, intellectuals, practitioners and activists profoundly concerned with evaluative understandings of the world we’re living in. The focus of the forum is to initiate an arena where no question is misplaced and irrelevant as long as we acknowledge that evaluation, critical thinking and contestation are accessible trajectories to better understand our past, present and alternative scenarios for the future.

Some say that the 21st Century or modernity altogether made humans more concerned with doing rather than being. As the classical Greek civilization valued the most reflexive thinking as a form of freedom from natural necessities, contemporary times profoundly involve individuals and the imaginary accompanying social practices in a restless logic of consumption, competition and engagement that profoundly - or some would say, radically – suspends or indefinitely postpones the autonomous capacity of human beings to question and reflect upon the social order and the meaning of social practices. The fast advancement of the logic of post-industrial societies, the gradual dissolution of alternative models to the capitalist logic and a multitude of other alerting factors pushed ahead a global spread culture of one-dimensional productions of meaning that advances a closure rather than a constant reflexive re-evaluation of cultural/social practices.

Many alternatives at hand are often condemned to marginality or lost in the plural practices where everything goes as long as it’s part of an intellectual market. The ‘fatal strategies’ of post-industrial societies to keep individuals captive, busy and seduced by contingent social arrangements and economic practices minimized the questioning detachment required to evaluate and give meaning through reflexive criticism and unlimited interrogation. Various labels were given to our unfolding times from apocalyptic ones to some more comforting yet not by chance lacking some vital optimism. Despite a wide-spread discontent and suspicion towards the daily realities of our current societies, most of the big questions are often left outside by the self-involved active pursuit of an imagined well-being that is no longer transgressed by harsh critical evaluation of its meaning. The academic arena itself also advances, supports, integrates and promotes limited particular methodologies that generate an effect of mainstreaming and often keeps researchers or practitioners out of the battle-ground for big questions.

The ongoing economic crisis made reality even harsher and pushed ahead the need for more thinking as many habitual categories lost their meaning or relevance. New ways of thinking could transgress some inappropriate conceptions or misconceptions that preserve their centrality due to the mechanics of habits. This is a time when a call to thinking is well-placed. This is a call to arms for critical studies that promotes alternative, questioning and multi-dimensional thinking.

When it’s about critical thinking and critical studies there is intrinsically an unending open list of topics to be included. The Fifth Euroacademia Forum on Critical Studies proposes the 5 sections (that are by no means exclusive):

Papers on the following topics (and not only) are welcomed:

Diagnostics of Our Times: Where Is the 21st Century Heading? ~ Our Societies Are As Good As It Gets: How to Escape the Closure of Meaning? ~ Consumerist Societies and the Captivity of Thinking ~ The Being/Doing Nexus ~ Assessing Models of Capitalism ~ Markets, Capital and Inequalities ~ The Remains of Individual Autonomy ~ How Plural Our Societies Truly Are? ~ Debating Ideal vs. Real Multiculturalism ~ Social Narcissism and Consumerism ~ The Role of Critical Thinking: Proposing Alternative Methodologies ~ Are There Any Alternatives to Capitalism Left? ~ Social Causes and the Pursuit of Social Beliefs ~ Protest and Social Change ~ Re-Thinking Revolutions ~ Hegemony and the Remaining Possibilities for Social Criticism ~ Loneliness and Isolation in the Era of Mass Communication ~ Living Low Cost: Values, Meaning and Market Exchange ~ Ideology and Other Dominant Narratives ~ Critical Economics ~ Post-Modernism and the Critique of Modernity ~ Marx and the 21st Century ~ Debating the End of Communism ~ Non-Oppositional Societies ~ Consolation, Complicity and Passivity Today ~ Who Still Waits For A Revolution? ~ C. Castoriadis and the Project of Autonomy ~ French Thinking and Alternatives for Thought ~ Eastern Europe and the Enrollment to the School of Capitalism ~ China and the Logic of Growth ~ Crises of Culture ~ Left and Right: Political Spectrums and Pluralism Re-Discussed ~ Art as an Exchange Value ~ Originality and Complacency ~ Literatures and Authors ~ Heroes and Heroines in Electronic Literature ~ Fiction and the Fictionalization of the Contemporary World ~ Film and the Persisting Hunger for Heroic Imagination ~ The Illusory Charity and Imagined forms of Contemporary Humanisms ~ The Growing Social Irrelevance of Philosophy ~ Replacement of the Logic of Becoming by the Logic of Earning ~ How Do We Look Back at Tradition? ~ Just Wars or Unjust Thinking? ~ The Myth of Cosmopolitanism ~ Facing the Self ~ Communication, Media and Simulacrum ~ Science, Pragmatics and Vocation: Who Pays What We Can’t Sell? ~ Is There Still a Postmodern or Any Other Kind of Condition? ~ Post-Marxist Way of Looking at Facts ~ The School of Suspicion and Evaluative Thinking ~ Feminist Readings of Our Contemporary World ~ Post-Colonialism and the Refurbished Other(s) ~ Theory and Power ~ Queer Theory and Living After the Sexual Revolution ~ Subaltern Theory

For complete information before applying see full details of the conference at:
http://euroacademia.eu/conference/fifth-forum-critical-studies/

You can apply on-line by completing the Application Form on the conference website or by sending a 300 words abstract together with the details of contact and affiliation until 1st of July 2016 at application@euroacademia.eu

5) We kindly remind you that there is a new extended deadline for abstract reception for the 6th Conference of the Aphra Behn Society Europe, "Gender Cartographies: Histories, Texts & Cultures in the Long Eighteenth Century, 1660-1830", hosted by the University of Huelva, Spain (5-7 October, 2016).

The new deadline for the reception of abstracts and round table proposals is May 20, 2016.

6) All the World's a stage: Shakespeare in Europe and the Americas

This study day brings together leading specialists to explore Shakespeare’s global cultural presence from Europe to the Americas via the Indian Ocean. No writer's work has been translated, performed and transformed by as many cultures across the world as Shakespeare's. Themes include Shakespeare's source material; postcolonial adaptations; performance on stage and film; and the cultural politics of European Shakespeare

The event, held in conjunction with the British Library exhibition Shakespeare in Ten Acts, is organised in partnership with the AHRC ‘Translating Cultures’ Theme, the Polish Cultural Institute and the Eccles Centre for American Studies at the British Library.

Full programme below, and details  of pricing and booking portal available here: All the World's a Stage: Shakespeare in Europe and the Americas 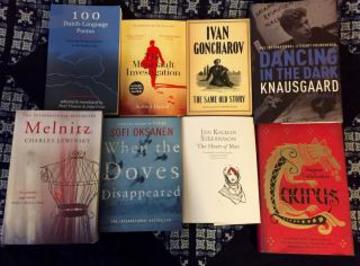