This research project was conducted under Lauren Dyer Amazeen with the help of Gabriela Mancey-Jones for Hidden Objects Oxford, a project which sheds light on the diverse collections of Oxford’s colleges. This micro-internship, which was set up by the TORCH Heritage Partnerships Team in close collaboration with the University of Oxford Careers Service,  was completed in Trinity Term 2020 and I would like to thank the Hidden Objects Oxford team of Lauren Dyer Amazeen, Amanda Game, Oliver Cox, Matthew Winterbottom and James Fordham for this opportunity.

I would also like to thank Dr Helen Wyld of the University of Edinburgh’s College of Art for her guidance on current Mortlake scholarship and Dr Georgy Kantor, Keeper of Pictures at St John’s, for his assistance in accessing the tapestry during the ongoing pandemic. I am also indebted to Professor Maggie Snowling, President of St John’s College, and Professor Irene Tracey, Warden of Merton College, and to their respective assistants Denise Cripps and Lisa Lawrence.

True to the name of the project, the Mortlake Supper at Emmaus tapestry of St John’s College is one of Oxford’s hidden objects. Not simply is quite little known about the tapestry (eg, its production, provenance or progeny) but it is also a work which few in Oxford have or will likely ever see. Hanging in the College’s President’s Lodgings, it is certainly one of St John’s finest pieces.

Tapestries have not in recent times received as much popular praise or critical attention as other art forms such as painting and sculpture. This limited regard for such opulent works which were much revered in their times is perhaps ensnared by the common tradition of referring to a tapestry as ‘after’ an earlier work (eg, Mortlake’s Supper at Emmaus ‘after’ Titian’s sixteenth-century oil painting), reducing the deft and creative translation process to a limited conceptual plane of copying, reiteration and unimaginativeness. Such a characterisation of the St John’s Mortlake Supper at Emmaus, as we will see, could not be farther from the truth.

The tapestry itself is one of three known surviving translations Titian’s Supper at Emmaus (c. 1530) by Mortlake Tapestry Works, a seventeenth-century London manufactory closely aligned to the court of James VI and I and later acquired by Charles I when it was renamed The King’s Works. The original Titian painting was in fact one of many purchased by Charles I specifically for Mortlake from which to create lavish tapestries, though the original is now held by the Louvre. Perhaps the most well-researched Mortlake Emmaus is that of the College of St George, Windsor Castle which is displayed in the chapel ambulatory (see archivist Clare Rider’s insightful discussion of the St George’s Mortlake. The other Emmaus sibling hangs on the ceiling of Hardwick Hall, home of the powerful Elizabethan humanist and prolific letter-writer Bess of Hardwick (aka Elizabeth Talbot, Countess of Shrewsbury and namesake of Dorothy L. Sayers’ fictional Shrewsbury College as depicted in Gaudy Night).

The scene depicted by these three tapestries varies little, however their unique ædicular borders reveal useful insights into their hidden histories. The artists of the St George’s Emmaus for example utilise the space at the head of the frame to emblazon the decorative border with a coat of arms; the arms themselves and the appearance of a Viscount’s coronet with ten silver balls to face have helped to date piece for the owner of the arms Sir John Mordaunt was only made a Viscount in March 1659. While there is no such secure identifying feature apparent in the St John’s Mortlake, there is a distinct religious inflection of the border ornamentation: the Jesu christogram at the top and the Biblical tablets and cross in the hands of the cherubs. The provenance of the John’s Emmaus is unknown, however the President at the time of its creation was Archbishop William Laud. In favour of Charles I’s religious reforms, Laud – after whom Laudinism, what now is commonly termed ‘High Church’ episcopalism, is named – would be a likely candidate to have commissioned the tapestry or received the piece. Dr Helen Wyld of the University of Edinburgh’s College of Art is investigating a possible connection between Laud and Mortlake which may unearth the tapestries early provenance.

As the St John’s tapestry is believed to be the earliest, it makes sense if the Mortlake Tapestry Works were reproducing one of their earlier cartoons that these affected religious elements were replaced to accommodate personalisation for John Mordaunt. Furthermore, the St John’s Emmaus is the only one in which the scene and frame are in conversation with one another – the medallion is directly above the head of Christ, who is centred in the original Titian painting, yes, but clearly heralded by the Mortlake frame. Even if the St John’s Mortlake was commissioned neither by nor for Laud, between the piece’s distinguishing Christian imagery and the Royalist bend of the Mortlake Manufactory, the reasons why Laud would have shown interest obtaining the piece is clear.

The fact that the tapestry is displayed in the College’s President’s Lodgings was one aspect which initially piqued my interest in researching the piece. Lodgings are indeed curious yet often overlooked exhibition spaces. The lodgings for Oxford’s Heads of House serve at least one very obvious function: to house the colleges’ (thirteen) Principals, (seven) Presidents, (seven) Wardens, (six) Masters, (three) Provosts, (two) Rectors and Dean. However, most lodgings occupy a central location within their respective colleges, meaning that they provide preeminent spaces for pieces to be displayed. Yet, while lodgings do often play a particular role in college-life (e.g., hosting distinguished guests and events), they are foremost functional living spaces for the Heads of House and their families. And so, if the line between public and private exhibition was blurred in general for pieces displayed in college, then it is only compounded by these dimensions.

It is clear, not simply due to the rarity of their Mortlake in particular, that St John’s chooses to use the President’s Lodgings to display some of the finest pieces in its collections. In the brief remarks on the College’s pictures, the Victoria County History of Oxfordshire chooses to record that of the College’s collection one of ‘the most notable is a flower-piece by Peter Breughel the Younger, which hangs in the President's Lodgings’ – in addition to later citing the three tapestries discussed in H.C. Marillier 1926 article ‘Tapestries at St. John's College, Oxford’, including the Mortlake Emmaus. By contrast, for example, the Warden’s Lodgings of Merton College do not serve this function of exhibiting College pieces. In Michaelmas 2019 the Warden kindly hosted a reception to welcome new graduate students to Merton and I remember being impressed by a number of works of art on the walls of the Lodgings. And so having studied the St John’s Emmaus and its immediate context, I was surprised to learn that the Warden’s Lodgings are appointed entirely by the personal collection of the Warden and her family – thus adding a new dimension of my understanding of what it means for a work to be displayed in such unique spaces.

While the Mortlake Emmaus may have a particular place in the history of St John’s President’s Lodgings if the connection to Laud is verifiable, it is important to state that none of the Mortlake Emmaus siblings are on public display (there is rumoured to be a fourth Mortlake Emmaus seen in France during the twentieth century and I would venture the opinion that it is a cartoon which left to Paris with the original Titian when the paintings purchased by the Crown for the Mortlake Manufactory were sold under the Protectorate). You cannot walk into a museum to see any of them. St John’s President’s Lodgings and Hardwick Hall are both known as personal residences, though only President’s Lodgings is still a private household, and St George’s Chapel is a royal peculiar – thus viewership of the Mortlake Emmaus is dependant on the display choices of St John’s College, the National Trust and St George’s College. And so in one sense, all of these spaces inhibit democratised viewing of the Mortlake Supper at Emmaus. However, these immediate contexts give each tapestry, and the experience of viewing each tapestry, a unique and distinctive flavour. To see these works adorning the walls of the royal peculiar in Windsor, or while learning of your local history in Hardwick House or attending a special reception hosted by the President of St John’s – the locations add to the vibrancy of their existence.

The conditionality of viewership which the St John’s Mortlake presents has made me reflect upon much of my own research experience with archives and college collections. Completing this internship, especially during the pandemic, reaffirmed my observation that the archivists, librarians and keepers of various institutions are always delighted to hear that someone ins interested in their collections – and I am always immensely grateful for their kindness and generosity. And so while the Mortlake Supper at Emmaus tapestries are not as accessible as if they were hanging in public museum, help is always there for those who ask. That said, if I had not been prompted by Hidden Objects Oxford to investigate the St John’s Mortlake, then I may well have gone the rest of my life without knowing it exists. Often we talk about ‘shedding light’ on a tucked-away archival item – in fact TORCH is recently co-organised the excellent Dark Archives conference – but to shed light something needs to be dark and hidden away in the first place. And so perhaps this circular metaphor (of things perpetually coming into and out of the light/darkness), as widely pertinent as it is elsewhere, is covertly unhelpful for thinking about how we can strike a delicate balance between the skilful preservation of such treasures and fostering their readiness to be experienced by and inspire new audiences.

I have no remedy. I am not arguing in favour of a new Comparative Lodgings Studies, but I think it is important to continually question what is right in front of us. Why is this painting in this lecture theatre? Why is this sculpture in this garden? For example, many colleges have over the past year celebrated their fortieth anniversaries of the first mixed students cohorts by hanging portraits in hall, a space which can too frequently be under-representational, of alumnae and female members of college communities. Returning to that delicate balance and how colleges can activate their diverse collections and historic exhibition sites: perhaps we need to ask not (only) what a college can do for their collections, but also ask what collections can do for their college.

Charles Tolkien-Gillett is a second-year MPhil candidate in English Studies (Medieval) at the University of Oxford. In brief, he is interested in how the medieval looks and sounds in post-medieval cultures. Charles’ research centres on early twentieth-century (re)mediations of medieval literary culture, namely the use of Old English and Old Norse/Icelandic poetry in the works of Gavin Bone and WH Auden. He is currently completing the first dedicated studies on the life and works of Gavin Bone.

To learn more about our collaboration with the Hidden Objects Project see:

Weaving tales of the Green Man: A journey into John Piper’s hidden tapestries

Thomson. W.G., [A History of Tapestry from the Earliest Times to the Present Day] (London: 1930) 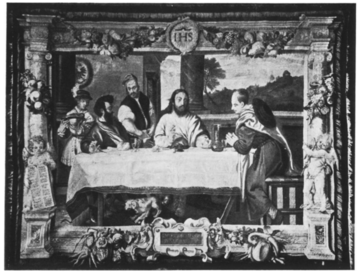