Weaving tales of the Green Man: A journey into John Piper’s hidden tapestries

A Research Micro-Internship with the Hidden Objects Project

The TORCH Heritage Partnerships Team, working closely with the University of Oxford Careers Service, set up this micro-internship with the Oxford-based project, Hidden Objects, which aims to enable the sharing of Oxford Colleges' collections with a wider audience.

For anyone with a passion for storytelling and a little bit of detective work, taking part in the Hidden Objects Project is an opportunity you cannot miss. The project, led by a group of Oxford-based curators and researchers with a shared interest in contemporary art and design (Lauren Dyer Amazeen, Amanda Game, Dr. Oliver Cox, Matthew Winterbottom and James Fordham), focuses on art collections and art practices in Oxford colleges in an effort to catalyse and fund a series of public facing events revolving around less known or less visible art. As part of the Micro-Internship experience, students are offered the unique opportunity to explore and investigate art and heritage ‘hidden’ around Oxford and ordinarily only accessible to a few.

The team was first introduced in a virtual meeting, where we discussed the research previously compiled by our talented predecessor, who contributed to the project with her unfailing help and assistance, and potential areas of interest for our upcoming research. This year’s subject, as they explained, was tapestries, which feature prominently in several of the colleges’ collections, most famously at Exeter College, which hosts the remarkable ‘Adoration of the Magi’ by William Morris and Edward Burne-Jones. We were all encouraged to freely explore a number of different aspects pertaining to the commissioning and creation of the tapestries, their placement, fruition and meaning; this material would be assembled in a report and presented to the whole group on the last day of the internship. The team particularly stressed the importance of engaging with the artworks in our own personal way, trusting our instincts and following our curiosity. Throughout the entire experience, against the backdrop of extremely unusual and scary circumstances, their support, either via email or via zoom, was a constant source of both comfort and motivation, and a bright beacon in uncertain times.

Coming out of a three-year research project, I had developed an effective modus operandi, which relied on an abundance of time and ready access to physical resources. Only now my time was limited, and I could not set foot in a library or in any college. Quite a daunting prospect! My exploration began at my former college, Wolfson College, where I fortuitously found out that a John Piper tapestry was on display in the library, depicting a foliate head evoking the so-called Green Man, the same motif portrayed on a number of Magdalen tapestries. As a new addition to the catalogue previously compiled, I was eager to know more about the Wolfson tapestry, but the circumstances of the current pandemic made things complicated: members of staff were at first unavailable, and I could not even set foot into Wolfson or Magdalen to see the tapestries with my own eyes. But I did not lose hope. While conducting some preliminary research into the Green Man and John Piper’s work, I was able to get in touch with the West Dean Tapestry Studio, whose artists had collaborated on a number of Piper’s foliate heads in the 1980s. Through them I managed to connect with two of the weavers who worked on Piper’s designs, who kindly offered to talk at length about their craft, the dyeing process, the implications of translating another artist’s design and their partnership with Piper himself. Meanwhile, things in the outside world were rapidly changing. I suddenly was in touch with the Archivists of both Wolfson and Magdalen College, who were incredibly kind and helpful, supplying not only photos of the tapestries, some of which I was even allowed to take myself, but also access to excerpts from correspondence pertaining to the acquisition by Wolfson College of one of Piper’s Namibian tapestries, a set of pieces executed by Ibenstein Weavers at Dordabis, Namibia, including the Magdalen tapestries. I was also introduced to the commissioner of the set, Orde Levinson, a prominent alumnus of Magdalen College, who graciously offered to answer my numerous questions and weave the last thread of these tapestries’ story.

If this experience had a moral, it would be that it is important to be resilient, tenacious and a little bit inventive when things do not seem to go our way. It was incredibly inspiring to see what we were all able to uncover from the comfort of our homes and with considerably limited resources, and I believe it is a testament to the Hidden Objects team and their wonderfully open approach to exploring art and heritage with heart and spirit. In the end, the freedom which I initially found intimidating in fact allowed me to be more creative and more original, to establish compelling connections and open up new avenues for further research. I highly recommend to anyone who believes that a single object can tell a thousand stories to consider this experience in the future, it is a unique opportunity to work with an extraordinary team of creative and talented people and immerse yourself in ‘hidden’ art.

Eva Haghighi is a recent DPhil graduate in Classical Languages and Literature at the University of Oxford. Her research addresses the representation of Etruscan people in the poetry of the Augustan age, and more broadly her interests gravitate around issues related to cultural representation, access and inclusivity. She is currently involved in a number of heritage initiatives, with particular focus on curatorial practices.

To learn more about our collaboration with the Hidden Objects Project see: 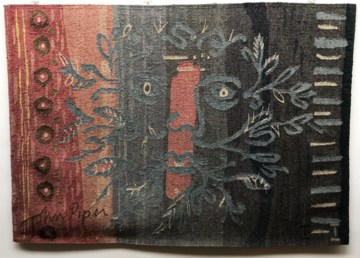