Andromeda, written by me and directed by Charlotte Vickers, is a queer reimagining of Euripides’s play of the same name. It constellates fragments from the Ancient Greek (in a new translation by Martina Astrid Rodda) with scenes from a contemporary love story between two young women. In centring the experiences of its LGBTQ+ female characters, the play explores how the stories we tell each other impact our sense of identity. Having received an initial grant from the Theatres Seed Fund towards the research and creative development of Andromeda, the second round of funding was intended to help us share the play with a wider audience.

Charlotte, our producer Elisha Owen, and I began preparing for a weeklong run at Camden People’s Theatre, London and a performance at Pegasus Theatre, Oxford, both scheduled for May 2020. In February 2020, we filmed a trailer for the production. Galaxies and words were projected onto the actors’ bodies, combining the play’s twin metaphors: stars and myth. A month later theatres were ordered to close before the first national lockdown was introduced. It felt quietly devastating to have to dismantle a production that had been years in the making. Andromeda was part of a raft of theatrical performances programmed for 2020 that had to be ‘unproduced’ by their creators.

Amidst the disappointment of the cancellation and the uncertainty of the pandemic and its impact on theatre, we received great support from our partners and funders. TORCH supported us to adapt our activity to focus on what we could deliver within the restrictions, and to pay our theatrical collaborators for work that they had already completed. A grant from Camden People’s Theatre allowed us to pay our creatives for some of the projected work, as they had lost most of their incomes with the closure of theatres. CPT also committed to reprogramme us as soon as they were able, demonstrating a faith in the project that has sustained us through this year.

As the playwright, I was able to redraft the script to incorporate discoveries we had made in the previous period of research and development, as well as feedback we had received in response to the work-in-progress sharing at Nottingham Playhouse in October 2019. Although I missed the dynamism and opportunities for serendipity that occur in the rehearsal room, I was supported in the redraft by feedback and exploratory chats with dramaturg Frey Kwa Hawking and Charlotte. Andromeda has always been a collaborative project, so it was vital to keep the collaboration and communication going over WhatsApp, email and Zoom meetings.

As lockdown continued, I watched with awe and hope as theatres adapted to produce experimental digital performances. While I’m not ruling out a digital incarnation of Andromeda in the future – and we plan to livestream a performance – it felt important to hold out for in-person performance. So much of the creative process has focused on finding a dramatic form that feels right for the content – balancing ancient and modern, lyrical and everyday speech, fragments and narrative arc. Turning it into a digital performance would have required yet another adaptation (and a larger budget!).

The enforced production hiatus gave Martina Astrid Rodda and me time to reflect further upon the research element of the project. In co-writing a chapter about the process for a book on reconstructing Greek tragedy edited by Andriana Domouzi, we discovered that Astrid had been (pleasantly) surprised by how I had taken their translation as a jumping off point for further myth making rather than trying to fill in the gaps suggested by the fragments.

Another unexpected, positive outcome was the strengthening of relationships with partner organisations. Having produced a workshop for young people at Pegasus Theatre in Oxford in the first phase of the project, Pegasus invited me to collaborate with their young company to write their summer show. The resulting play, Goldfish, will be performed in July 2021. Similarly, being in continued dialogue with Camden People’s Theatre and the Archive of Performances of Greek and Roman Drama put us in a stronger position to apply for additional funding from Arts Council England and the Humanities Cultural Fund when lockdown began to ease.

After a fallow period, new growth emerges. In March 2021, we heard that our funding applications had been successful, enabling us to produce a professional production. Andromeda will be performed at Camden People’s Theatre on 27th-31st July, with a live streamed performance and a panel discussion as part of the Humanities Cultural Programme. We can’t wait to share it with you. 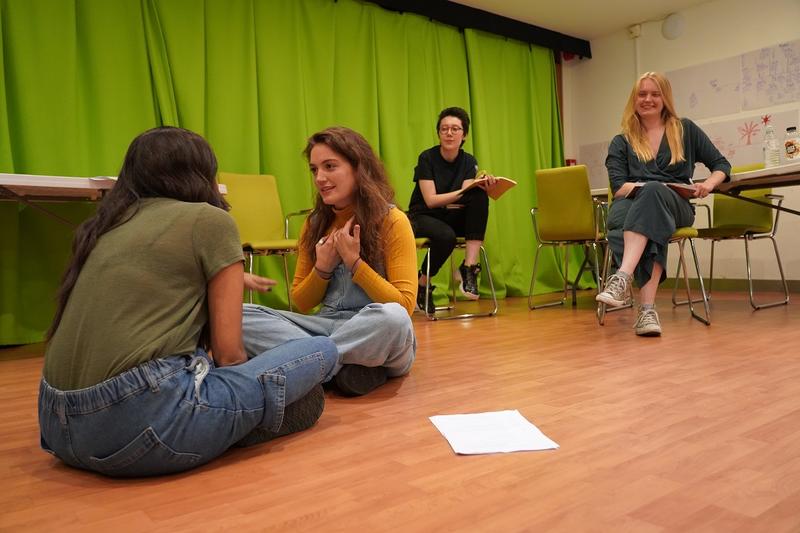