Modernity and the Shock of the Ancient: The Reception of Antiquity in the Late 19th and Early 20th Century 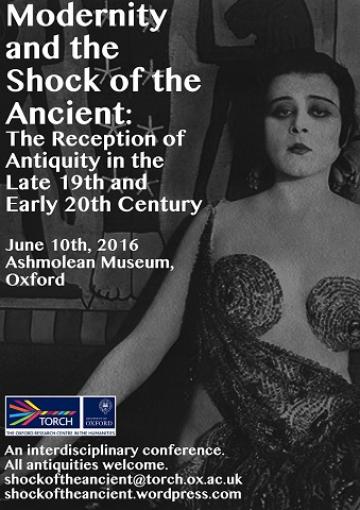 Modernity and the Shock of the Ancient: The Reception of Antiquity in the Late 19th and Early 20th Century
June 10th, 2016, Ashmolean Museum, Oxford.

The ancient world was vital to what it meant to be ‘modern’ at the turn of the last century. Yet antique reception in this period is vastly understudied in all areas except that of classical Greece and Rome. At a time when the looting or wholesale destruction of non GraecoRoman ancient sites is creating new public interest in their importance to modern cultures around the world, it is crucial that this narrow picture is reconsidered.

We invite abstracts for a one day interdisciplinary conference at the Ashmolean Museum on June 10th, 2016. This conference will reevaluate the reception of the ancient past in the late 19th and early 20th century, and its relation to constructions of ‘modernity’. It will explore the reception of a geographically diverse antiquity – from Greece and Rome to Egypt, Mesopotamia and East Asia – in a variety of spheres including literature, public art and architecture, museum exhibitions, cinema, and consumer goods. As a new century began, the ‘ancient’ was signalling the ‘modern’ in both popular and high avantgarde culture, and was harnessed to a range of (often opposing) political agendas. In the process, a ‘new’ antiquity was born, the study of which illuminates what it means to be both ‘modern’ and ‘Western’, today as much as in the early 20th century.

We are pleased to be hosting three invited speakers, Prof. Sarah Iles Johnston (Ohio State University), Prof. Richard B. Parkinson (University of Oxford), and Prof. Fritz Graf (Ohio State University). The day will include a guided tour of relevant museum collections led by Dr. Paul Collins (Ashmolean Museum, University of Oxford). The conference will promote genuine interdisciplinary exchange, to which end panels will be followed by a lengthy discussion period.

Papers might explore such questions as:
● In what ways was the past reappropriated and reimagined, and ‘ancient’ used to signal ‘newness’?
● How did discovery and decipherment enable ‘new’ pasts and how did this transform historical narratives, of the self and/or the other?
● Did the past become more accessible or more alien in this period?
● What did narratives of ‘modern progress’ owe to scientific, technological, and political power? How is this demonstrated in the uncovering of ancient objects and decipherment of texts?
● How did museums narrate the journey from ancient to modern?
● How do interpretations of the ancient in these periods continue to inform our experiences of historical narrative, political projects, and cultural institutions today?

We welcome abstracts on these or related themes from postgraduates and early career researchers across humanities disciplines, including literature, classics, art history, oriental studies, and anthropology. Please send abstracts of up to 300 words, for papers of 15-20 minutes, along with CV to shockoftheancient@torch.ox.ac.uk by Friday, April 8th. For more information see our website shockoftheancient.wordpress.com or visit us on facebook at facebook.com/shockoftheancient.