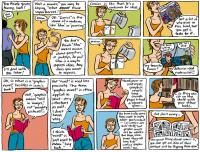 Finally, on Saturday 24th June 2017, the Comics and Graphic Novels network will also be hosting a day-long British Council USA-TORCH funded workshop entitled ‘Divided Cities: Culture, Infrastructure and the Urban Future’. The workshop will focus throughout on the interlocking themes of urban identity, top-down planning, environmental degradation and migration, exploring the ways in which cities and twenty-first-century urban cultures and infrastructures have come to embody wider global conflicts, inequalities and divisions, before asking how different cultural forms might allow us to imagine new urban futures.

Though not specifically comics-oriented per se, this workshop will include a morning presentation from comics journalist, artist and writer, Josh Neufeld, author of the graphic novel, A.D. New Orleans After the Deluge (2009), with a response from Professor Hillary Chute.

This event is ran in collaboration with the British Council USA and The Oxford Research Centre in the Humanities (TORCH).