Encountering the objects: Reflections on observation, experience, and poetry

The postgraduate training day on “Memorable Objects” took place at the Pitt Rivers Museum—a chance to gain new insights from two of the Museum’s curators, Dr Christopher Morton and Professor Laura Peers. We spent the two hours examining six objects: more precisely, three bound books of photographs, one bound collection of notes from Japanese students, and two handmade objects from members of the Haida people. Our hosts encouraged us to resist the urge to analyze and interpret the objects before first observing them for what they were: things made by people who were not in the room to explain themselves or their stories.

Only after the curators seemed convinced we could hold back our analysis were we allowed to discuss the symbolism and cultural implications of what we were observing. It was an exercise in intellectual restraint, and the reward was the opportunity to think differently by observing differently.

Reflections on my encounter and the experience of encountering

The experience reminded me of Martin Buber’s dictum: “All actual life is encounter”. I returned to my hotel room alone and scrawled my reactions. I illustrated a personal, pedestrian, but (hopefully) practical ontology for objects, artefacts and relics.

Objects (and the people who experience them) in poetry

Comparative literature expert Arnold Weinstein proposes that literature and art are “pathways of feeling”. Perhaps poems are pathways which show us the routes objects may take in transcending to their position in our minds.

In Percy Bysshe Shelley’s sonnet Ozymandias, the poet introduces the reader, gradually and carefully, to the identity of the titular object. The reader is introduced first to an object (the “two vast and trunkless legs of stone”), then to the object’s relation to a historical identity, (“Ozymandias, King of Kings”), and, finally, to its survival through “the decay/ Of that colossal Wreck”. The poem is, of course, more complex than this linear pathway, but it is a path nonetheless.

However, a reader can also reach the past by starting in the future. In Tracy K. Smith’s poem Museum of Obsolescence, the poet takes the reader to a space and time where an object is an observer looking back at the reader’s present: “there’s a small room/ Where a living man sits on display. Ask,/ And he’ll describe the old beliefs”. Alternatively, a poem can move back and forth along the course of time. In Wisława Szymborska’s The End and the Beginning, the poet writes of the “someone” who “has to push the rubble/ to the side of the road” and “set the door in its frame” now that “All of the cameras have left/ for another war”.  In the poem, the old war is behind the reader, and the new war has not yet finished creating new rubble. For now, someone must make sense of what remains.

Three questions remained for me after the seminar:

Alisan Atvur is a user experience and design researcher with a background in healthcare and chronic diseases. He currently studies English philology at Pomeranian University in Słupsk. 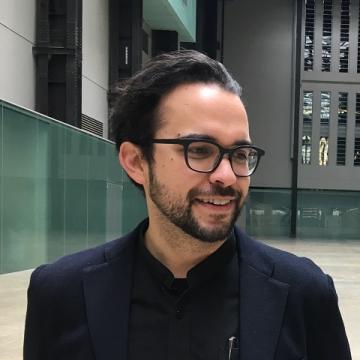