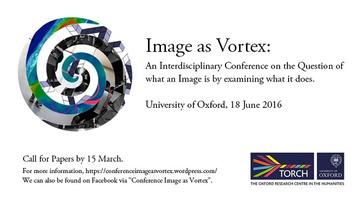 Image as Vortex: An Interdisciplinary Conference on the Question of what an Image is by examining what it does.

This conference on the 18th June 2016 seeks a positive answer of what an image is (without contending ourselves merely with what an image is not), focusing on images as a starting point rather than an end in themselves: even if an image is the end of (artistic or technological) production, the produced image means the start of the life of the image. Seen as such, the image is not a representation or an illustration, but rather a starting point of something else to come.

To study this question, we are inviting interdisciplinary contributions from scholars from the humanities, sciences, social sciences, as well as artists, to take part in one of four panels; The Image in/as Art, The Mental Image, The Image in Use and The Time Image.

To apply to speak at the conference, please send an abstract of 250-300 words to imageasvortex@gmail.com with your preferred panel in the subject line. The deadline for call for papers is the 15th March 2016. Participants will be notified of acceptance by mid-April. For more information we can be found at https://conferenceimageasvortex.wordpress.com/ or on Facebook via “Conference Image as Vortex”.