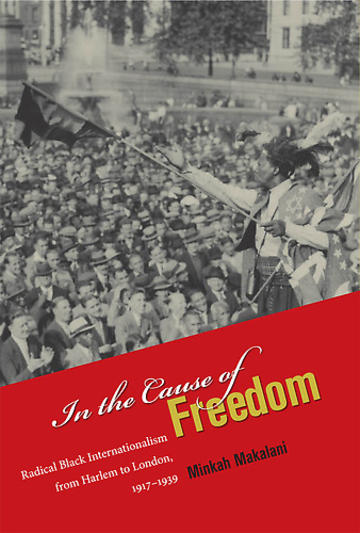 After a brief discussion of the contemporary political climate in America, Makalani opened the main body of his presentation with a passage from Frantz Fanon’s Wretched of the Earth: ‘In the colonies the economic substructure is also a superstructure. The cause is the consequence; you are rich because you are white, you are white because you are rich.’ Fanon’s formulation here redraws the lines of class privilege under traditional Marxism to account for the racialized conditions of power he observed in regions of imperial rule. In his talk, Makalani recounted how many twentieth-century, black radicals, such as C.L.R. James and Claudia Jones, similarly attempted to ‘stretch’ Marxist thought to fit the racial logics of coloniality. Many of these radicals, in Makalani’s explication of their thinking, even came to understand a notion of the racial or colonial ‘other’ as situated at the heart of modernity and its political association of liberal democracy, embedded, for instance, in conceptions of time (‘progressive’ vs. ‘backwards’) and humanity (‘European’ vs. ‘non-European’.)

In what proved to be one of the most piquant discussions of his paper, Makalani further elaborated how radical black Marxists subsequently sought alternatives to liberal democracy and modernity by turning to the very places where they observed the erasure of the non-European subject, for example, on the slave plantation or in the colonial labour regime. Here Makalani read an excerpt from Toni Morrison’s novel, Beloved, in which a former slavewoman, Baby Suggs, delivers a sermon to other freed or escaped slaves in a woodland clearing. Makalani’s reading from Morrison’s novel was a memorable part of his talk for many, as he shared with the network how Beloved explores a new way of ‘thinking the human’ and community through the lived experience of racial oppression.

Sympathetic and candid throughout, as in his reading of Morrison’s novel, Makalani’s presentation modeled deep engagement with the nuances of black radical thinking and a diversity of spatial contexts and their relationship, topics of especial interest to members of the ‘Race and resistance’ network. With appreciation for the scope of Makalani’s discussion, respondent Dr Justine McConnell, Researcher in Classics at Oxford, praised the speaker for his attention to Morrison’s novel and proposed other literary resources for future study. Imaobong Umoren, DPhil Candidate in History, similarly raised avenues of additional development, especially into black women’s involvement in radical Marxist groups, while Professor Elleke Boehmer, Professor of World Literature in English at Oxford, thanked Makalani for revisiting the writings of Frantz Fanon and Fanon’s relationship to Marxism and, among many other things, inquired about diaspora as the space in which many black radicals theorized decoloniality and political association beyond or outside the nation-state.

Following his presentation, members were grateful to continue the conversation with Dr. Makalani over dinner. For more information on Dr Minkah Makalani’s research and writing, visitors to the website are warmly encouraged to consult his book In the Cause of Freedom: Radical Black Internationalism from Harlem to London, 1917-1939 (2011).