Kofman and Nietzsche on Life Itself

Wittgenstein’s statement is well-known: ‘whereof one cannot speak, thereof one must be silent’. This is rejected by Adorno as ‘strictly anti-philosophical. If philosophy could ever be defined, it would be as the effort to say that which cannot be spoken of’.[1] However unsettling this might be, philosophical reason must not be conflated with what is reasonable. Such a principle is relevant to any discussion of the phrase ‘life itself’, an expression that doubles down on its ambition (in question is not just life, but life itself). It presses on where mentions of ‘life’ are usually the signal that the moment for meaningful discussion has passed (‘c’est la vie’).

Rather than life itself, philosophers have often preferred to discuss ‘being’ or existence (everything has being or is, even stones). In this blog post drawing on thinkers within continental philosophy I want to briefly explore the stakes of using the term ‘life itself’ instead. This is to say that ‘life itself’ provides an alternative mode of approach to what has elsewhere been called being or existence. I am therefore using the term more broadly than referring to the living, the biological, or the organic.

An example of this can be seen in Sarah Kofman’s long, hostile review of the generally well-received study by Jean Granier, Le problème de la vérité dans la philosophie de Nietzsche [The problem of truth in the philosophy of Nietzsche] (1966). Granier as it were translates Nietzsche’s thought into a philosophical vernacular recalling the work of Heidegger in particular. Kofman objects to this, writing that:

Granier misues the terms ‘Being’, ‘existential’, ‘ontological’, ‘essence’, and ‘intuition’, [and] Heideggerian expressions (‘unveiling of Being’, ‘availability to Being’, the distinction between Being and being […]. Now, all these expressions are fraught with metaphysical significance, and Nietzsche, far from ever using them on his own account, condemns them as obfuscatory, substituting for them concepts which seem to him more appropriate and less equivocal. Nietzsche never speaks of ‘Being’, or even of ‘being’, but of ‘Nature’ or ‘life’, the ‘World’ or ‘Experience’, ‘phenomena’ or ‘appearance’.[2]

In using these terms, Granier builds on the work of Heidegger, who had been broadly admired for recalling philosophy’s attention to the big question of ‘being’ (a task which in his view it had forgotten). But on Kofman’s view, however radical Heidegger’s language had originally been, it has since come to represent the new establishment. Using the terminology quoted encloses one in a reified, calcified discourse, rather than breaking things open. This is what Nietzsche allows one to do, with his uncompromisingly general appeal to value ‘life’, even and especially if this more accessible term is open to misinterpretations.

A second point on which Kofman disagrees with Granier’s reading of Nietzsche is on the topic of theological rather than philosophical frameworks for thought. Granier had dismissed Nietzsche as a religious revivalist, someone seeking meaning in the rituals of ancient Greece, notably in his work The Birth of Tragedy out of the Spirit of Music, which revolves around the discussion of two opposing gods, Apollo (representing form, clarity, control) and Dionysus (representing force, creative destruction). Responding to this accusation of religiosity on the part of Nietzsche, Kofman writes that: ‘with [Dionysus] Nietzsche is not substituting a Greek god for the God of the Christians […] we will not follow Granier when he says there is no atheism in Nietzsche’.[3] Kofman instead reads the importance of Dionysus in Nietzsche’s work as formally a divine figure, but one whose role is to divert attention away from any ‘beyond’ or afterlife, and back towards the world and ‘life itself’. He is therefore a paradoxical atheists’ god. Dionysus is of course the god of worldly, physical pleasure (drunken, sexual, etc.), but he is also the god of earthly fertility: these two aspects can be united through Kofman’s reading of him as a god serving to delegitimise the metaphysical, ethereal, otherworldly space traditionally inhabited by gods.

For Kofman reading Nietzsche, Dionysus’s jubilant celebration of life itself also means that he should be seen as the god of surface rather than depth, of appearance rather than truth. An example of this can be found when in the play Bacchae Dionysus tempts macho king Pentheus into transvestism. But beyond this, Kofman takes the embracing of surface appearance over deep truth as a broader methodological principle suggested by Nietzsche’s thought. Thus in her characteristic style ventriloquizing the philosopher she is discussing, she writes that ‘metaphorical style is the sign of a plenitude of life, just as “demonstrative” style indicates a poverty of life. The deliberate use of metaphors affirms life, just as the privileging of concepts reveals a will to nothingness, an adherence to the ascetic ideal’.[4] Metaphor steers us away from the hand-wringing of metaphysical claims to truth, it warns and fortifies us against the ‘the melancholic and weeping men, the humid men unable to comprehend “fire”’.[5] This ‘fire’ is surely a way of referring to the sheer thereness of the physical world –and, of course, it would not do for this fire to be anything but a metaphor.

John McKeane is Lecturer in Modern French Literature at the University of Reading, whose research looks at literary and philosophical thought in French and comparative contexts. His most recent publication is a translation of Christophe Bident’s 600-page Maurice Blanchot: a Critical Biography (Fordham University Press, Autumn 2018).

Life Itself in Theory and Practice 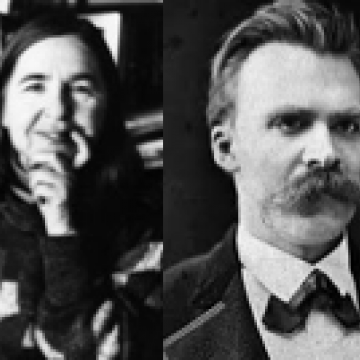