On 5 July 2019, the Oxford Comics Network, part of TORCH, hosted Moving Images: Comics & Travel. In this review, I’ll provide a short overview of the conference with the intention of providing an insight to (1) the content of the conference, (2) some of the topics discussed, (3) the venues, (4) the hospitality and (5) the community.

Moving Images brought together 24 scholars from more than 15 countries worldwide to provide an insight into the broadly conceived area of comics and travel in a range of ways. The panels drew on multiple disciplines and comic genres, techniques and ideologies, and explored issues such as representations of the migrant experience and the practical aspects of depicting movement, among others. Comics & Travel was a thoughtful concept that proved capable of drawing the public and participants into debates and reflections on very different topics.

The Keynotes were two well-known figures in the comics world and academic field: the conference was opened by Paul Gravett, a journalist, curator, broadcaster and author or several non-fiction books on sequential art, and it finished with the comic author and journalist Joe Sacco- specialist in testimonial comics and graphic journalism depicting the experiences of victims of war and conflict.

The topics of the panels discussed were as follows:

The already broad issues covered by the panels became the foundation for other conversations. For example, a debate about cultural appropriation and the moral conflict that arises between publishers and comic artists when one of them behaves inappropriately. This was the case in the debate that followed panel 9: “Manga in the West”, regarding the presentation by Jacob Habinc, entitled: “Berliac´s Norway through Lens of Manga – An Analysis of the Gekiga Aesthetic in SADBØI”. In his talk, Habinc explained how Berliac´s SADBØI may have displayed cultural stereotypes of the Japanese and Norwegian societies represented from an external cultural point of view.

Contemporary immigration policies and their impact on civil rights have also been discussed during panel 8: “Migration and Refugee Comics”, which included Teresa Ferreiro´s presentation “The Strange. Narrative Elements and Techniques in Comics´ Media” and Aaron Humphrey´s “Refugee Comics and Transnational Graphic Citizenship: The Case of Eaten Fish”. They discussed how respect for the civil rights of immigrants is often only achieved once they have proven their humanity by performing a heroic act, or by finishing a relevant artistic or academic project, leading the media to embrace them as a sympathetic character.

In panel 3, during the talk “Isolation, Repetition and Minute Movements in Tim Enthoven´s Binnenskamers”,  Laurike in´t Veld  explained how visual metaphors in sequential art are used to highlight states of isolation, compulsive behaviour and anxiety. Also, through the examples of Tim Enthoven´s story, the presentation reflected on mental health and how it connects to the control of our spaces and surrounds, including our own body. Ultimately, it shows how people externalise their anxieties, providing a graphic approach to recognise signs of mental issues and to be able to understand them in a more empathetic way.

In panel 2, Jordan Newton presented “Strange Lands for Strange Times. A Look at International and Interplanetary Travel in America Superhero Comics”, which analysed American superhero comics produced during 1945-1965 and how their narratives form an intentional message that may have helped to shape the American mentality and influence their contemporary geopolitics. The hero of these stories would always find himself (or herself, but mostly him) in another planet or country where he would be surrounded by people he will try to defeat, as they are a possible threat to American values or Americans in general. This message that was once used in order to justify and win the Cold War may now have become a part of their culture and their immigration policies.

In panel 6: “Graphic Representation of Movements in Comics”, Roberto Bartual presented “Depicting Movement in Comics”. He analysed how the rise of transportation in Europe and new technologies, such as chronophotography, influenced the techniques of representing movement in early comics, like those of Winsor McCay. His analysis aims to dismantle some myths about the influence of cinema in comics. After his talk, the questions and comments from the public diverged into theories on whether the well-known chronophotographs taken by Eadweard Muybridge and Leland Stanford of a race horse running were the main reason comic artists were influenced  to portray objects and animals moving from left to right as opposed to not only our reading and writing direction. This very specific discussion, which several participants joined, was one of the multiples examples of how active the members of the conference were and how relaxed the environment was.

Every panel had a moment for questions and comments that were, in many cases, just as inspiring as the talks. Each featured insightful questions that drew attention to the link between the media of comics, its techniques, history and content to our general culture, politics and way of thinking.

The conference took place in the beautiful city of Oxford, which contains some of the best preserved medieval (and later) university buildings in the world, as well as a wealth of architectural gems, from the classical to the modern. Oxford also has amazing natural landscapes and is a compact city, which makes it very easy to walk around it. Specifically, the conference took place in two fascinating venues: The Taylor Institution Gallery and Queen’s College.

All the panels and the presentation of the first keynote speaker, Paul Gravett, were hosted in The Taylor Institution Gallery, divided between  the main hall and a separate piano room, which is amazingly decorated with paintings on the walls. It has high ceilings and a pair of neoclassical columns on each side of the stage.

After the last panel, all the members of the conference walked together a short distance to the magnificent  Shulman Auditorium, for Peter Kessler´s conversation with keynote speaker, Joe Sacco.

The Shulman Auditorium is set within the Nun’s Garden in the historic Queen’s College. To enter the Auditorium, one must follow a path through a garden full of a variety of flowers and trees to a modern building designed with the simple beauty of stone, oak and glass. The auditorium is filled with natural light and stays respectful to its historical context. Both venues (as well as, of course, the city of Oxford) are a must-see and a huge contribution to the experience of the conference.

Based on the feedback of the attendees to the conference, the organization has shined, among other things, for its hospitality.

One day before the conference, all the participants were invited to meet in a nearby pub to have some drinks and to meet each other.

On the morning of the conference, all members were received at the hall of the Taylor Institution Gallery and provided with a programme and directions for the day. Those who were also presenting in a panel were given a folder with the material needed and a badge with their names on it. They were provided with coffee, tea, different sweets and fruits. They could also walk around the two rooms and enjoy the exhibition of several comic pages made by PositiveNegatives. The work of this group was also discussed in panel 1 by Dominic Davies and Emma Parker, talking about how the comics´ medium represents the multiple layers of refugees and migrants experience or trauma through metaphorical visuals and symbolic design.

At lunch, drinks and different sandwiches were served in the main hall.

Dinner took place in the Turl Street Kitchen, which was described in The Times as a “lovely, relaxed, youthful canteen with impeccable local and sustainable sourcing credentials, comfy pricing, no pretentiousness to speak of and a pretty, historic location”.

I was looking forward to arrive at this point in the review. Even considering the quality of the content, delivery and organization of the conference, I would say that the  community was one of the best parts and that it transcends the event.

Many people talk about networking at conferences and other events but we rarely talk about a very important part of what this social experience means: the feeling of belonging.

In general, academics and researchers are used to working alone, probably from home and sometimes with the concern of whether there is really a person reading our words or listening to our voice. Does the work you pursue really fulfil the needs of anyone? Is it beneficial to society? It is difficult to see, especially in the niche space occupied by comics and comics studies.

Moving Images was a place were suddenly all that work and study was able to flourish in a meaningful manner-where you could feel that your work and the work of others resonates and contributes to creating a place for this community .

In this particular conference, filled with some very famous people, I feel it´s important to highlight the inclusivity of our community. The way people were debating in those rooms and treating each other with familiarity and respect made the conference an example of the principles we were discussing during those debates: the need to create safe spaces; the huge value of humanity; the admiration and respect for the voice of others, the knowledge of others and for education.

Thus, with regard to the community that you would have found at this event - and even if you are not an expert or even a fan of comics- if you appreciate people talking passionately about what they love, debating respectfully and defending their views with informed knowledge, you would have surely enjoyed Moving Images. 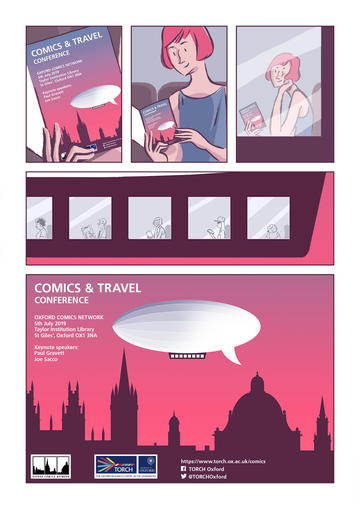