What might it mean for a poem to come true? If a life, if history itself, were modelled upon a poem? Perhaps all our hopes and dreams would be granted. Or perhaps our darkest fears would find uncanny realisation.

Demons land: a poem come true is an installation that employs film, paintings, sculptures, music, and text to tell the imaginary history of an island in which a poem comes terribly to life. That poem is Edmund Spenser's *Faerie Queene*, perhaps the single greatest poetic work of the English Renaissance.

Our story begins like this: in the early 1800s a man called the Collector arrived in a woebegone island, festering with bone-idle settlers and recalcitrant savages. He knew what was needed. A world as ordered and ideal as The Faerie Queene’s endless repeating, endlessly rhyming stanzas. The Collector would build the perfect society in the image of a perfect young man and woman. The boy called Red would become Holiness, the girl called Brit would become Chastity. Together they would create a world of Justice and Love.

If only it were so simple.

The Collector's dream failed: not because his world failed to be like the poem; but because both the poem and the land were other than he thought. They had indigenous energies, lives, untapped implications that his discipline hadn't imagined.

200 years earlier, Spenser had nourished similar dreams. He wrote The Faerie Queene when he was helping establish the Elizabethan plantation in Ireland. He was one of the new English, taking the lands of the Irish, resolved to reform their religion and subdue their culture. But the indigenous population were crafty and resistant. Violence stained the soil. Spenser no doubt felt deeply implicated in these troubles. But he also saw a solution – to engineer a genocidal famine, and from that parched ground construct a reformed world.

It never quite happened – neither the reform, nor the genocide - but the suffering continued apace. The Irish burnt down Spenser’s house. His poem was left unfinished, or rumoured burnt with his daughter in the fire. Spenser fled to London, a broken man, and died a few weeks later on a freezing January day in 1599.

But the poem survives, an epic attempt to at once reflect and repair the errors of history. In other words, The Faerie Queene writes the future as much as the past.

This suggests the imaginative premise of our project: that subsequent global history, a repeating mission of conquest, education, and colonization, has been a tale of this poem coming differently, imperfectly to life.  It has long been understood that The Faerie Queene, in its claim to change or to model lives, is an exemplary Christian humanist poem. In our project, it becomes the text of the unfinished modern world.

This is where Demons Land too finds its dark shadow – as an allegory of Britain's most notorious colony, the prison island called Van Diemens Land.

And the story continues. The poem is coming true now, today, even as we breathe.

Demons Land is a collaboration between Simon Palfrey (writer), Tom de Freston (artist), Mark Jones (filmmaker), Luke Lewis (composer), and Stephanie Greer (actress). However, part of the fiction is that the exhibition is curated by a contemporary woman called Ola. She discovers the Collector’s paintings, sketches, and fragments of text in the attic of her ancestral home. She realizes that they tell the secret history of an island beneath the visible world.

She decides to tell the story in an exhibition. At its centre would be a film, made entirely by Ola, in which she plays all the roles herself. The result is a project of both historical and personal discovery.

Where have we been, and where might we be going?

The very first public showing of the work-in-progress is at the Ashmolean’s FrightFriday evening. The materials will be finished by May 2017, when the inaugural full exhibition will take place in the gardens and temples of Stowe National Trust - a place also created in the image of Spenser’s poem, as an act of political critique and fantastic idealism. Like the poem that inspires it, our exhibition will then go travelling.

Demons Land: a poem come true is funded by both TORCH and the AHRC. 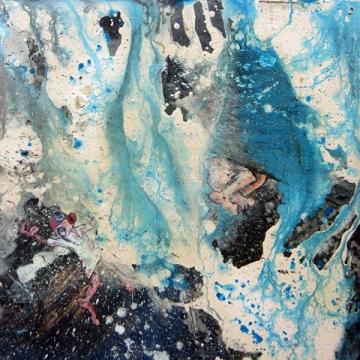