The stakes of deathlessness

“…various philosophical doctrines were discussed, and, among others, the nature of the principle of life, and whether there was any probability of its ever being discovered and communicated. (…) Perhaps a corpse would be reanimated; galvanism had given a token of such things; perhaps the component parts of a creature might be manufactured, brought together and endued with warmth.”

Once pronounced dead, a corpse on a life extension plan may begin anew as a medical donation to a cryonics facility. Whoever finds the body must act quickly. First, find the gap between the fourth and fifth left ribs. With a long needle, inject heparin into the heart. Perform chest compressions. Ventilate. Load the body into an ice bath. Organise a prompt transfer to a cryonics facility, where the “patient” will undergo cryonic suspension, a non-standard medical technique using extremely low temperatures to halt metabolic decay. Depending on the chosen option, priced between $80,000 and $200,000 (by Alcor), the patient’s full body or brain will be stored in a liquid nitrogen vat, awaiting reanimation or mental uploading by a future, more advanced society.

As the prospective solution to the millennial problem of mortality, cryonics is a tough sell. Currently, the suspension process is irreversibly damaging to the body and reanimation techniques do not exist, though proponents are looking to molecular nanotechnology and progress in medical imaging for leads. To complicate things, the technical literature of cryonics is difficult to parse, as the case for it is isolated from other related, established disciplines like cryobiology [Hutchinson, 2017; Crowley, 2010a], and the case against it is very poorly documented [Crowley, 2010b, 2010c] aside from non-technical thought-pieces which often misrepresent the ideas (see e.g., Shermer’s piece “Nano Nonsense”, which opens with a shocker about mushy fruit but forgets cryoprotectants). Considering the technology doesn’t work, a unifying theory hasn’t so far been found, and the literature is opaque, estimating the plausibility of cryonics is subject to the same kind of difficulties as the historical forecasting of other speculative technologies – some of which took off against the odds (e.g., electricity, space travel, nuclear power) while others remain entirely forgotten. To sign up for a cryonics plan is thus to take a gamble, of which rationality depends on the probability of success, the value placed on life after life, and the person computing the equation. Like advocates of “cryothanasia” or those signed up for Nectome’s fatal brain vitrification procedure, would you die early in order to, perhaps, live?

Part of cryonics’ seduction derives from the paradigm shift the project requires. Indeed, within its framework, death is a failure of scientific imagination: “true” death is defined, not as the inability to resuscitate, but as the irreversible loss of information critical to personal identity. Cryonics proposes a future body without secrets, known to such an extent that it can be repaired and regrown from scratch. Bodies, in fact, would no longer be mandatory: a patient might choose to shed hers for streamlined consciousness as pure information on the integrated circuit, an uploaded mind in a world of simulations. A sufficiently developed theory of information will have, by this point, addressed the gaps in the laws of nature: what Life Itself is, where it comes from, and how it could be manipulated to humankind’s advantage. Casting off the need for mortality and the body would thus relieve us of two of the fundamental requirements, classically conceived, for humanity, and catapult us into a post-human world of unimaginable potential. Responses to this ambitious reconceptualisation are polarised. For some, this vision attests to basic human anxiety, and the nausea of lives sub-optimally spent; for others, it promises a new victory in the long human tradition of leveraging technology against the limitations of self and environment.

As a would-be technology of survival, cryonics is also a population ethics question. It’s a project for eternal life where the stakes for global death have never been so high – with catastrophic climate change, global poverty, nuclear risk, risks derived from biotech and automated systems threatening individual and collective life. But who is the dream of cryonics for? The project’s reliance on macro-historical scales – a species-level account on geological time according to which the world has only gotten better; increasingly peaceful, stable, and advanced – elides the granularity of identity, locality, and politics. It enables familiar hand-waving: a vague expectation of producing “cryonics for all” with minimal intervention or regulation. One need only look at the cost and the private corporate service to imagine how promises of inclusivity could fail in the usual ways. Survival is easier when one is dealt a good hand: who would have access to life after life?

In many ways, however, the kernels of horror many reportedly feel at the prospect of cryonics are not found in the project’s failure, but in the potential consequences of its success. In Shelley’s Frankenstein, one of the West’s many stories of technological resuscitation, the afterlife in this world is unendurable for both Victor Frankenstein and his creature – the latter tortured by his own abjection and betrayed by the false promise of love, the former exiled to the remotest and loneliest place on Earth. “None but those who have experienced them can conceive of the enticements of science”, Victor warns the arctic adventurers who find him. His talent for study, he reminisces, gave him a glimpse of pure potential. He would elucidate the recesses of nature, ascend to new and seemingly limitless powers, embody something of the divine. So the familiar tale begins.

The intuition towards cryonics is thus not unknown to us: as old as our oldest stories, not unlike what drives the signees to one-way missions to Mars, or which pushed prehistoric people to set off across oceans without knowing for certain that they would ever find land. Say, then, that you didn’t need to ever die. Say you could wait it out, in the cool of a nitrogen vat, in a warehouse in the American desert, until the future came knocking. With which future are you throwing in your lot? What, in you, deserves to survive?

Anne M. Ploin is a social scientist and Research Assistant on the Creative Algorithmic Intelligence project at the Oxford Internet Institute.

Life Itself in Theory and Practice 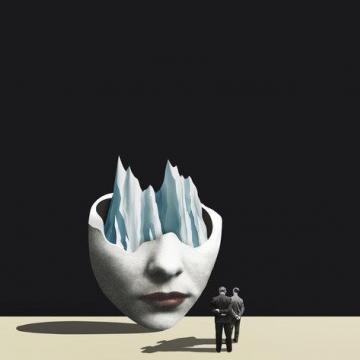