What makes an exemplary memorial?

Realist, imposing bronze figures, off-set by carved reliefs which are angular and express

effort, engagement and suffering, are surmounted by a massive stone howitzer. The imagery manages to balance the acknowledgement of courage with the considerable cost of the effort to see things through. The vivid empirical detail carries an evident acknowledgement of something owed. Forty-nine thousand members of the Regiment were killed in WW1.

This mural-sized oil painting features women, children and animals as witnesses to the destruction of the town. So-called ‘collateral damage’ bears witness here.

A huge cast concrete cube comprises an ‘inverted’ library and reversed doors (with no handles). The books are lost narratives, and the doors a place of no entry. This is like a negated monument. The site is important for the history of the Jewish community, and the memorial recalls 65,000 Austrian Jews killed in camps in Austria between 1938-1945.

A memorial to the seige of Malta, 1940-1943, during which thousands of lives were lost, service members on both sides, as well as civilians. For the sculptor, this is a monument to universal loss – on both sides. ‘A sober remembrance, free from jingoism.’ The memorial is made up of three elements: architecture, sculpture and sound. A stolid neo-classical cupola houses a massive E-flat bell. A stone ship form acts as a catafalque to a bronze effigy – set feet-first towards the harbour waters to recall a burial at sea. The bell tolls every day at noon.

The aesthetic accomplishment of each of these works, means that they fuse what is said by the monument or memorial, with how it is said. Thoughts are embodied: to no small extent the thoughts expressed are a matter of style, of aesthetics, inseparable from the expressive means and context. Aesthetics are not an instrument here, not a means to saying something, but are significantly constitutive of what can be said. There is a ‘performative’ element here, when expression at its best, permits a memorial to bear witness to something larger.

These memorials are markers of recognition – without false consolation: they make larger acknowledgements and responses possible – out of specific occasions of loss – without setting out to glorify or find false positives.

Jagger’s Artillery Monument models the new context of war. It expresses mechanised conflict, with people caught in the new machinery of war. The new condition of conflict is mechanised.

In Picasso’s Guernica, the cost is weighed by collateral witnesses. Place is the very meaning of the work, but the memorial exists apart from it. The embroidered mural version of the painting, hung at the United Nations, was covered-up on the occasion of Colin Powell’s making of the phoney case for war in Iraq. So the memorial has the power still, to point-up hypocrisy and the precipitate rush to unjustified aggression.

In Rachel Whiteread’s memorial work, the pain is not spoken about; it is implicit in the form and feel of the memorial. This feels like a monument of nullity, of negation. And the dehumanisation is not confined to the victims. This does the opposite of name or identify: it seems to hold an accumulation of nothingness as if it were a thing. Both victim and perpetrator are made into ‘things’ by the use of force, by violence. Something of Simone Weil’s remorseless logic of force – that she sees in the Iliad as the precurser – seems to touch this monument to a crime against a community.

Michael Sandle’s monument is intended as a marker of universal loss. The event is specific, but the loss must be remembered to both sides. And the recollection and understanding is on-going. The daily tolling of the bell, is a sonorous performative carried across the waters of the harbour entrance. Never send to know for whom the bell tolls…

Charles Gurrey was a panellist in the second workshop of the Monumental Commemoration strand, ‘Grave Stones’. You can listen to the panellists’ presentations on our podcast series. 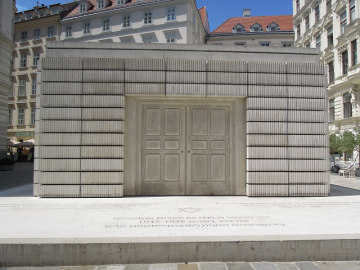