Where an Object Holds its Meaning, Part One

Part One: The Event of a Photograph

The album sits open on a foam book rest. Each page carries six small photographs mounted on thick, bottle-green card. The edges of each image are sharp and each one is saturated with shadows and light: a white line of horizon, a canvas tent flap, men in shirt-sleeves and military trousers shielding their eyes against the sun. The album, the curator tells us, documents the 1897 British punitive expedition to Benin, a military response to the ‘massacre’ of British troops a year earlier.[1]

The expedition seems to unfold photograph-by-photograph. Here are troops outside city walls, here they are marching and now, here they are again, leaning their rifles against the rubble of the broken houses and smiling into the camera. There is the story of what happened in Benin and here are the photographs that illustrate it, but today, the curator says, we’re going to think about what histories might be written if we solely used material culture.

Opened in 1884, the Pitt Rivers Museum is home to over half a million archaeological and ethnographic objects from all over the world and across time-periods. Underpinning the museum’s collecting policy is the idea that all accessions should have perceived ethnographic value, that they should in some way speak to questions of society and culture. This idea of ethnographic value was often part of the reason why collections like the Benin album were offered to the museum, with families donating archives for the information they held on pre-colonial West Africa captured on celluloid. But what exactly, the curator asks us, makes up social and cultural data in a photograph?

To hold one of the album’s photographs in your hands means holding onto two things: the object itself but also all the object biographies that come packed around it like sawdust and packing nuts. If we dust the biographies away for a moment, what do we have? Thick card, heavy bindings, image after image arranged into sections—a carefully curated collection of physical materials that regardless of narrative signify intention.

One of the photographs in the album makes reference to the practice of human sacrifice in Benin. While this was one of the moral justifications for the punitive expedition, one of the ethnographic traces of pre-colonial Africa that supposedly give the album its informational value, perhaps more interesting for me as a poet, is the way the album’s materiality communicates a need on the part of the expeditionary force to commemorate this ‘fact’ as much as the fact itself.

Photographs always talk about relationships. Like poems, they draw on the conventions of their tradition to generate their meaning. They imply an audience, they refer to a point of fixed time inside the photograph and the fluid point of time in which they are viewed. Trying to locate the ‘event’ of the photograph, its social and cultural data, multiple sites come into view: the punitive expedition, the moment of photographic capture, the curation of images into an album, the offering of the album to the museum and, today, our looking at the images.

A lifecycle of meaning emerges where the multiple events of the photograph flicker inside a single material space. The album’s ethnographic value lies less in the ‘facts’ contained inside each photograph than in the dialogue that surrounds and constitutes them. Less in the idea of human sacrifice than in the need to hold the idea of it, fixed on the page for everyone to see. I see the act of holding, I see the desire for audience and I wonder who will one day see me and my part in this conversation.

The album sits open on a foam bookrest. The curator lets the pages slip through his fingers. We move on to the next object.

Mariah Whelan is a poet and PhD Researcher at Manchester University. You can find out more about her writing at mariahwhelan.com or follow her on twitter @MWhelanWriter.

[1] ‘Massacre’ is the term used by the British military and press to describe the killing of all but two men of a British-led expedition to depose the King of Benin and is used to reflect contemporary motivations for the punitive expedition rather than my interpretation of events. 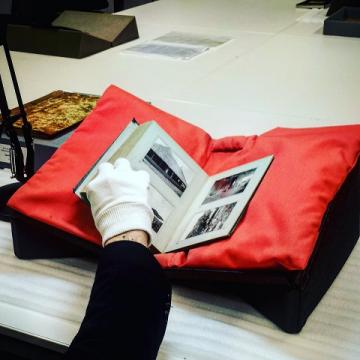