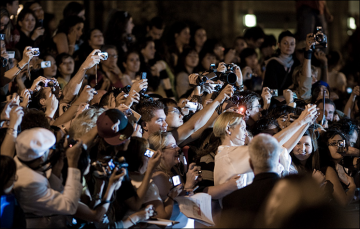 A joint initiative between the Faculties of English, History and Modern Languages, the Oxford Celebrity Network brought together scholars working across the Humanities division.

‘Celebrity’ is often cited as one of the defining characteristics of western modernity. But celebrity has a history, which has rarely been explored in detail. In recent years, though, concepts of fame and celebrity have become more and more important to scholars of history, literature, music, art, politics and philosophy, among others. This network’s main aim was to deepen and enrich thinking about the concept by drawing together a range of new perspectives spanning different periods to explore how it relates to concepts such as renown, glory, honour, image or charisma; and how these are entangled with material, literary and visual culture, technological, social and economic change.

To this end, and with the help of funding from the Andrew W. Mellon Foundation and TORCH, the network ran a series of interdisciplinary seminars and other academic activities. The network also focused on providing support for events related to the study of celebrity run by academics at Oxford and other institutions, including a symposium on the fame of Benjamin Disraeli and the TORCH/Wolfson College conference ‘After Image: Life-Writing and Celebrity’. We also ran public engagement activities on the history of celebrity, in partnership with the Ashmolean Museum and the Bodleian Library.