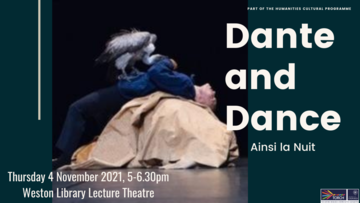 This event is part of the Dante in Oxford 2021 project, part of the Humanities Cultural Programme.

Register here for a ticket to the in person screening.

Luc Petton, choreographer, will present a screening of Ainsi la Nuit, his extraordinary ballet for human dancers, birds and animals inspired by Dante’s Divine Comedy. Luc Petton will also be in conversation with members of the audience. The event is programmed in conjunction with the display ‘The Divine Comedy from Manuscript to Manga’ which is open to the public in an adjacent space of the Bodleian’s Weston Library. The film screening will be followed by a response from Professor Sue Jones and a Q&A.

Please note, this event will be recorded and available to watch on the TORCH YouTube channel after the event.

Chair: Professor Gervase Rosser is Professor of the History of Art and curator of the joint exhibition about Dante which will open at the Ashmolean Museum (‘Dante and the Invention of Celebrity’) and Bodleian Libraries (‘Dante from Manuscript to Manga’) in September 2021. His work on early Italian painting has engaged with the relationship between ideas, texts and images in the art of Duccio, Giotto, and other contemporaries of Dante. He has contributed an essay on Dante and the visual arts to the Oxford Handbook of Dante, due to be published in this anniversary year.

Luc Petton founded the dance company Le Guetteur in 1994. An avid ornithologist since childhood, he began to work with birds in various projects. In addition to his staged choreographies, he intervenes with his company in hospitals to work with disabled children and the elderly. Birds do not share the language barriers of human beings and consequently can help to establish new modes of communication. Ainsi la Nuit is a creation by Luc Petton launched in 2017 which responds to Dante’s Divine Comedy through the movements of dancers, owls, a vulture, a wolf, and a circus artist. At an event to be hosted at the Bodleian Library in November 2021, Luc Petton will introduce a screening of a film of this production. Luc Petton is an Officer of the French Ordre des Arts et des Lettres.

Professor Sue Jones is Professor of English Literature, and the Barbara Pym Fellow and Tutor in English at St Hilda's College, Oxford. She has published widely on Joseph Conrad (including Conrad and Women for Oxford University Press), nineteenth- and twentieth-century women's writing, the periodical press, and modernism. Formerly a soloist with the Scottish ballet, Glasgow, she also writes on the history and aesthetics of dance. She is founder and director of Dance Scholarship Oxford and author of Literature, Modernism, and Dance (Oxford University Press, 2013). She was awarded a Leverhulme Fellowship 2017-18 to write a book on Samuel Beckett and choreography.