With Joji Hirota and The London Taiko Drummers & Spark! 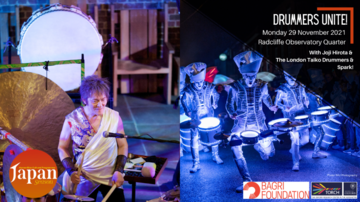 Part of the Humanities Cultural Programme, one of the founding stones for the future  Stephen A. Schwarzman Centre for the Humanities.

This event is supported by the Bagri Foundation

Join us for the finale event in our Japan Season, part of the Humanities Cultural Programme. The Japan Season has brought together artists and performers based both in the UK and Japan for a series of exciting collaborations and activity across Oxford. The festival will conclude with a showcase from two exciting drumming groups; Joji Hirota and The London Taiko Drummers & Spark! for an explosion of sound, colour and theatre in the heart of Oxford.

Drummers Unite will open with a performance by Spark! that combines high-impact drumming, dynamic choreography and beautiful lighting design. Joji Hirota and The London Taiko Drummers will then perform a series of lively compositions for 45 minutes before returning to Spark! for the finale.

Tickets are free but booking is required.

Please note, this event will be entirely outside, so please dress appropriately 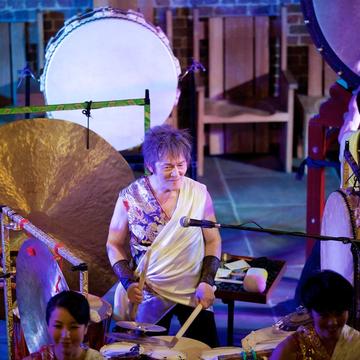 Joji Hirota and The London Taiko Drummers were founded in the 1980’s, and are highly regarded as an established Japanese traditional and contemporary Taiko Drumming Group. Group leader Joji Hirota has worked across the field of music, dance , theatre, films, TV throughout his career.

They have performed at various occasions, such as the UK Business Award Ceremony with the presence of HRH The Prince of Wales, they were the opening act for the LIVE EARTH at Wembley stadium and have appeared at various festivals such as WOMAD in UK and Worldwide. They have also represented Japanese Culture (Music) as a part of Japanese Government project as the envoy to Saudi Arabia, Oman, Africa, Israel, Europe - among other countries.

Film performances have included, Last Samurai, Harakiri, 47 Ronin and The Isle of Dogs. Other composition works have been included in BBC Dramas as well as the Wildlife Survival TV series which won the best documentary film award. Joji has also work with the Royal Shakespeare Company as percussionist and co-composer and gave a Taiko workshop for the actors. In 2004 Joji was also awarded the Ambassador’s Commendation Award by the Japanese Embassy in UK.

In 2011 when the Tohoku earthquake and tsunami hit northern Japan, Joji responded by creating Beyond the Requiem - a concert based on his arrangements of Tohoku folk songs. 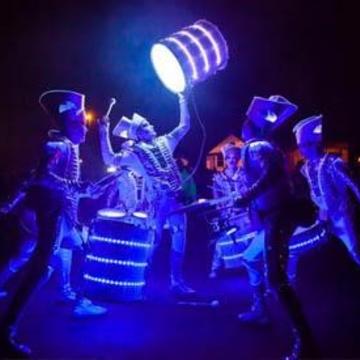 Spark!  is a medium-scale street theatre show performed by five to seven characters that combines high-impact drumming, dynamic choreography and beautiful lighting design. The performance combines static set-pieces, movement between sites and audience interaction.The performers constantly shift the focal point of the show and sometimes surround the audience completely so they feel immersed in the drama which unfolds. The show gradually builds in intensity culminating in a huge climax of light, sound, smoke and movement.

Contains many drumming patterns from compositions by Ohba.

It is usually accompanied by flute, taiko, shamisen and kane and contains humorous boastful phrases in the Akita dialect.

This has the meaning of being thankful for people you respect and Nature, expressing the joy of praise and the pursuit of ones own ideals and goals.

Hiten is the celestial nymph and Ryu the dragon, who both appear in many Buddhist myths. These deities who are the guardians for Buddha and the people, are seen flying in the sky with grace, Hiten often playing an instrument such as a harp or flute and Ryu showing his physical super power.

The Harvest - Composed by Joji Hirota

In the Autumn, many Harvest Festivals are held all over Japan. Everybody celebrates for the harvest, for long life and for each others welfare and friendships. People sing and dance all through the night to the traditional Japanese rhythms.

Supported by the Bagri Foundation