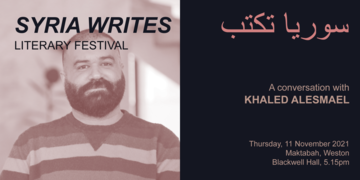 Khaled Alesmael is a Syrian author, journalist and short film maker based in London. In his exile, he has gone on to write two queer books and poems, including Selamlik, regarded by many as one the first homoerotic perspective of the Syrian war. Selamlik, the title of which brings to mind hope for change and freedom, tells the story of Furat his childhood and journey from war-torn Syria to Sweden as a refugee. The book, which bears many parallels to Khaled’s own journey, has been widely acclaimed as a powerful account of an emergent Arab queer identity, his writing has been compared to Jean Genet's in the Swedish media, published in Swedish and German and soon in different languages. Khaled received an award for his short, Coffee with Sukkar, at the Gothenburg Film Festival in 2019 and went on to win the Swedish Radio Award 2020 for his short story A Cotton Bag Carries Damascus. In the Meantime His debut Selamlik is the shortlist of Skoutz Award in Germany.Khaled was an accomplished radio journalist before he left Syria and worked in a major cities in the MENA and Europe. He claimed asylum in Sweden and he is a Swedish citizen now.
You can keep up with Khaled’s artistic output at @KhaledAlesmael and https://khaledalesmael.com

The Syria Writes Literary Festival will run from Saturday 30 October to Friday 26 November. It will feature public talks from Syrian authors and activists and intimate lunch-time conversations with some of Syria’s most beloved authors. The Festival is co-hosted by Suzan Meryem Rosita, Curator of Syria and Silence, and Mohamed-Salah Omri, Professor of Arabic and Comparative Literature.

Brought to you by the Syria and Silence Project