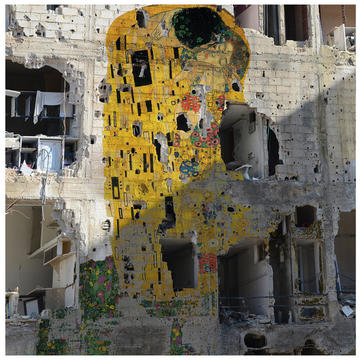 We gather in the place where words come from, to find the unity we know at the end of words.

The year 2021 marks the 10-year anniversary of the conflict in Syria. The Syria and Silence project was created in response to the silence surrounding the war in Syria where a peaceful uprising against the Syrian regime turned into a humanitarian catastrophe. A decade of war in Syria has devastated the country and spawned one of the worst refugee crises of our times.

The Silence Hub and the Oxford Network for Armenian Genocide Research have teamed up in this new project to create a pop-up library on the theme of Syria in in the Bodleian’s Blackwell Hall (18 October – 26 November 2021).

The library – Mektebe –  will be staffed by librarians from the local Syrian Oxford Community and be accessible for the public for browsing and reading during the usual opening hours. Mektebe means literally ‘a place of learning’, and we hope that our pop-up-library becomes a place where people learn about and from each other. We think of it as a temporary subject library on Syria!

Syria and Silence is part of TORCH’s Humanities for our Times series in Autumn 2021. Leading up to our exciting library opening on 18 October (marked by an official ribbon cutting ceremony!), we will run an essay competition for young people in three languages (Arabic, English and Kurdish) on the theme of silence, peace and Syria.

After our grand opening, we will be joined by an all-star line-up of authors from Syria (we like to think of it as a mini literary festival!). We will also host a cookery workshop, a graphic novel workshop for young adults, and a Show & Tell of some of the Bodleian’s  Oriental section’s finest manuscripts from Syria.

Our collaborators at the Bodleian say: “One of the most exciting things about this project is the opportunity to communicate that we are not just a library about ‘old things’ but that librarians are continuing to buy contemporary books in many languages from many cultures. Mektebe, by mirroring the collection of contemporary Syrian novels in the collection, will offer visitors to the Blackwell Hall a glimpse into the hidden world of books that form part of the contemporary life of the library and are normally only seen by members of the university.”

The announcements will be added to the TORCH ‘What's On’ page in due course when the full details of the programme has been confirmed. Please keep an eye on our project page to find out more.

If you want to meet us, you can watch a commemorative event  we hosted on the tenth year anniversary of the war in Syria here.

Images: All artworks shown on this page are by Tammam Azzam (courtesy of the artist)