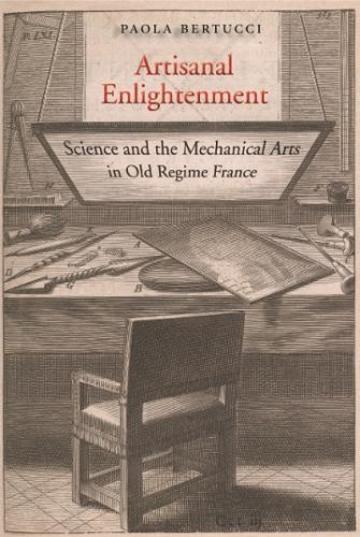 Paola Bertucci (Yale) will present and discuss her book Artisanal Enlightenment: Science and the Mechanical Arts in Old Regime France.

Paola Bertucci’s book aims to place the mechanical arts and the world of making at the heart of the French Enlightenment, tackling key 'Enlightenment' notions including improvement, utility, and progress. Establishing a rich and detailed history of the 'arts' and their relation to the sciences, through The Société des Arts, founded in Paris in the first half of the eighteenth century, she traces the perspectives of learned artisans who understood themselves as artistes. By asserting themselves as such, they distanced themselves from craftsmen and artisans (workmen driven by routine) on the one hand, and on the other hand from scientists, 'advocating a clear distinction between theoretical and practical knowledge, which aimed to discredit the expertise of academic institutions in technical matters'. By reversing the hierarchy between theory and practice, they sought to play an active role in the administration of the state, making a case for the mechanical arts as 'useful knowledge' crucial to France’s commercial and imperial expansion.

Members and guests of the Writing Technologies network will discuss with the author a series of questions stemming from the network's focus on the histories of disciplinary fields, invention, authorship, and the relationships between hand and mind, metaphor and machine.

If, as Bertucci shows, the Société des Arts was shaped by the social and intellectual hierarchies and distinctions of the Old Regime, this case reflects wider issues around the hierarchy between manual and intellectual work, and distinctions between fields of knowledge, which were also challenged by the 'plasticity of the relationships among the arts, and among the arts and the sciences' that enhanced collaborative work in the period. The 'fluidity of the territory of the mechanical arts', covering as it did manual and bodily aspects, pleasure, refinement, and ingenuity, brought about a certain perception of inventive activity, rooted in practical, material labour while also being the product of 'genius'. Translating their practices into words (Writing Technologies, in other words), the artistes produced literary outputs that situated the talented and skilled artist as an author, while remaining distinct from learned writings about craft activities (such as Encyclopédies), since the artistes' ways of knowing were grounded in 'sensorial intelligence'. The esprit of the mechanical arts presented machinery as the result of complex design work and compositional practices, and as a means of thinking about and governing the material world, bringing into being a kind of 'politics in the machine' that provoked a rethinking of the division of labour.

This event is part of the TORCH Writing Technologies Network

You will be contacted within 48 hours of the event with the Zoom link for this event. Please be aware tickets will close an hour before the event.