For the fifth week of TORCH Goes Digital, we focused on the theme of “Reading”. Reading encompasses a fascinating interaction between the written word and the reader. The process is shaped by prior knowledge, experiences, attitude, and the language community—which is culturally and socially situated.

Popular content included Dr Hanna Smyth’s write-up of her work with the TORCH Heritage Seed Fund project Stories of Oxford and War, and a fascinating talk by Professor Ann Jefferson, A Genre in Crisis: The Novel in 1940s France. Many stories related to reading, writing, and books are featured in Trusted Source, including Thomas Hardy's invention of Wessex in his novels; how an island inhabited in the 7th century inspired writers centuries later; and where you can experience Tolkien's Middle-earth.

To celebrate the #TORCHGoesDigital! theme for this week, the TORCH Heritage programme looked back at two collaborative projects with independent cultural venues, Compton Verney Art Gallery and Park and Chawton House, where new research and creative thinking by Oxford students and researchers helped to unlock previously under explored stories.

We also highlighted two Book at Lunchtime discussions centred around Representing the Dead: Epitaph Fictions in Late-Medieval France, and Reading the Code. In the former, author Helen J. Swift (Medieval and Modern Languages, University of Oxford) joined an expert panel to discuss how late-medieval French writers used literary representation of the dead as a springboard for exploring the nature of human being. In the latter, panellists discussed whether language is a simple code, or whether meaning is conveyed as much by context, history, and speaker as by the arrangement of words and letters?

On the evening of Thursday 23rd April, we had our fourth Big Tent, Live Events! live-streamed event. Professor Abigail Williams and Giles Lewin spoke on "The Social Life of Books: A History of Reading Together at Home", interspersed with charming performances from Giles on his violin. 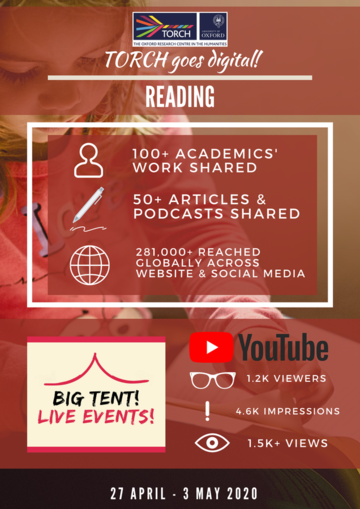