In Grave Stones, the second panel-led workshop of the Monumental strand, participant Stephen Barker drew our attention to the new memorial for animals erected on the Western Front by the Australian War Animal Memorial Organization.  There’s much of interest here, but what struck me principally was the layout: a rough semi-circle which has about it something of a ritual space.  In this post, I offer a few reflections on circles, hugs, grief and fragments in relation to post-war commemoration.

In Tony Tanner’s introduction to his book Venice Desired (1992), he quotes a phrase from W. H. Auden’s poem ‘In Memory of Sigmund Freud’ (1939): ‘sad is Eros, builder of cities’.  Auden ‘probably had in mind’, Tanner thinks, passages such as this one from Freud’s Civilisation and its Discontents (1930):

The peculiar process of culture proves to be in the service of Eros, which aims at binding together single human individuals, then families, then tribes, races, nations, into one great unit, that of humanity. (Quoted in Tanner, p.1)

Opposed to ‘instincts of destruction’, Tanner continues, Eros urges and promotes building, which is to say that ‘in pursuit of its larger communal “bindings”, culture has to “levy energy from sexuality”’ (p.1).  The city can therefore be seen as a great act of creativity, a ‘binding up’—and notably, the Greek word πόλισ (‘polis’) is cognate with others such as πολίτεία (‘politeia’), which mean community, commonwealth, polity: that is, social binding together.

When a city is bombed—like Coventry, like Berlin (representatives from whose churches were panellists at the workshop)—the city is unbound.  Aerial bombardment is the answer of Thanatos to Eros, death’s undoing of desire.  These words—‘unbinding’, ‘undoing’—resonate with others that we use to describe the experience of grief.  ‘She was shattered’, we say, or ‘he fell apart’, ‘she had a breakdown’, ‘he went to pieces’, ‘I’m in bits’.  In the Jewish tradition, mourners visibly exhibit this sense of being torn apart by rending their garments after a loved one’s death.

The aesthetic of some war memorials is to embody this feeling of being shattered.  The example that sticks in my mind is the Monument to the Victims of Fascism in Kaunas, Lithuania.  I visited this monument in 2010 and later wrote a poem about it:

Across Europe, memorials break up.

Aware of the inadequacy

Of their own curvature.

By Berlin, the rounded shoulders of Thiepval

Have given way to gaunt slabs.

By Kaunas, they are claws.

As if trying to reach through

And snatch back the dead.

To scratch and tear the world

The viscera of onlookers.

A phrase in the biblical book of Isaiah recognises the connection between grief and falling apart: ‘the Lord has sent me’, says the prophet, ‘to bind up the broken-hearted’ (61.1). (A later verse makes explicit the matrix of grief, feeling shattered and ruined cities: ‘they shall build up the old wastes, they shall raise up the former desolations, and they shall repair the waste cities’ (61.4).)  Perhaps this is why hugging (including hugging oneself) is an instinctive reaction to anguish: it’s a literal attempt to keep someone together when they feel they’re falling to pieces.

At the Graves Stones workshop, we encountered instances in which buildings do the monumental equivalent of hugging.  After the bombing of the medieval Coventry Cathedral in 1940, Sir Basil Spence built a new cathedral whose buildings constitute a kind of prosthesis attached to the old building.  As our panellist the Very Reverend John Witcombe, Dean of Coventry, explained, the new building takes the visitor on a journey into the light.

The same is true of the Kaiser-Wilhelm-Gedächtnis-Kirche in Berlin, whose former pastor Pfarrerin Dr Cornelia Kulawik also joined us as a panellist for the workshop.  The original church, a memorial to Kaiser Wilhelm I, was bombed in 1943.  After the war, the architect Egon Eiermann added four new buildings: a church, tower, chapel and foyer.  These are grouped sensitively around the remains of the old church, prosthesis-like again.  Indeed, the new church and the tower are an octagon and a hexagon respectively—round buildings, albeit with facets.

Inside the new church, one can also see the Stalingrad Madonna, an image of the Virgin Mary drawn in charcoal by Kurt Reuber, German soldier, physician and Protestant pastor, during the Battle of Stalingrad.  What strikes me about this drawing of a hug is its roundness.  There is absolutely nothing warlike about it—the curves are all about protection, love and new life.  The picture is startlingly reminiscent of the works of the German artist, Käthe Kollwitz, whose son and grandson were killed in the First and Second World Wars respectively.  Kollwitz’s sculptures and images, such as ‘Mother and Son’ (Pietà) (1937-8), ‘The Widow’ (Die Witwe) (1922-3) and ‘Lamentation’ (Die Klage) (1938-40), link through the curves of wrapped arms the themes of sexual reproduction—Freud’s Eros, a form of creativity—and the grief occasioned by loss through war: the mother’s arms around the son rhyme with those of the bereaved wife around herself.

In December 2016, the Gedächtnis-Kirche sadly became again the site of violence when a terrorist attack was made against the adjacent Christmas Market.  This time, the ensuing memorial has ostensibly more in common with Kaunas than with Coventry or the surrounding buildings in Berlin.  The designers Merz Merz have created a crack filled with a golden alloy which runs along the pavement and up the steps into the church.  The Goldener Riss ensures that sundering is set in stone (though, from a Christian point of view, it’s also possible to read the route into the church as one of hope).

Fragments/bindings: in the end it’s unhelpful to think in terms of an either/or.  One of the lines of discussion at the workshop was about the nature of healing.  Pain deserves honesty, seemed to be the consensus.  A healed wound does not disappear but remains in the form of a scar.  Binding up the broken-hearted—whether in the form of monuments or otherwise—will be most efficacious if it can keep in view what it was like to have fallen apart. 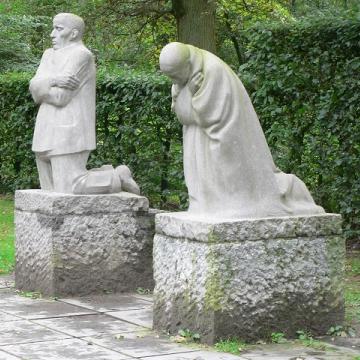